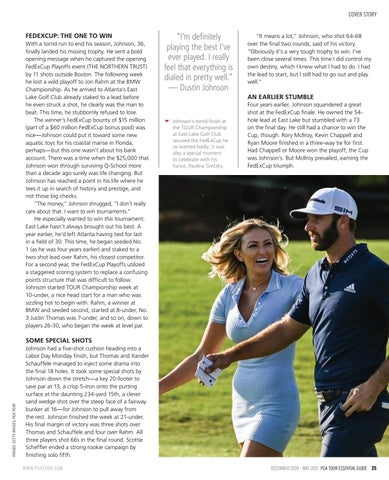 FedexCup: the one to win With a torrid run to end his season, Johnson, 36, finally landed his missing trophy. He sent a bold opening message when he captured the opening FedExCup Playoffs event (THE NORTHERN TRUST) by 11 shots outside Boston. The following week he lost a wild playoff to Jon Rahm at the BMW Championship. As he arrived to Atlanta’s East Lake Golf Club already staked to a lead before he even struck a shot, he clearly was the man to beat. This time, he stubbornly refused to lose. The winner’s FedExCup bounty of $15 million (part of a $60 million FedExCup bonus pool) was nice—Johnson could put it toward some new aquatic toys for his coastal manse in Florida, perhaps—but this one wasn’t about his bank account. There was a time when the $25,000 that Johnson won through surviving Q-School more than a decade ago surely was life changing. But Johnson has reached a point in his life where he tees it up in search of history and prestige, and not those big checks. “The money,” Johnson shrugged, “I don’t really care about that. I want to win tournaments.” He especially wanted to win this tournament. East Lake hasn’t always brought out his best. A year earlier, he’d left Atlanta having tied for last in a field of 30. This time, he began seeded No. 1 (as he was four years earlier) and staked to a two-shot lead over Rahm, his closest competitor. For a second year, the FedExCup Playoffs utilized a staggered scoring system to replace a confusing points structure that was difficult to follow. Johnson started TOUR Championship week at 10-under, a nice head start for a man who was sizzling hot to begin with. Rahm, a winner at BMW and seeded second, started at 8-under, No. 3 Justin Thomas was 7-under, and so on, down to players 26-30, who began the week at level par.

“I’m definitely playing the best I’ve ever played. I really feel that everything is dialed in pretty well.” — Dustin Johnson

“It means a lot,” Johnson, who shot 64-68 over the final two rounds, said of his victory. “Obviously it’s a very tough trophy to win. I’ve been close several times. This time I did control my own destiny, which I knew what I had to do. I had the lead to start, but I still had to go out and play well.”

Johnson’s torrid finish at the TOUR Championship at East Lake Golf Club secured the FedExCup he so wanted badly; it was also a special moment to celebrate with his fiance, Paulina Gretzky.

Four years earlier, Johnson squandered a great shot at the FedExCup finale. He owned the 54hole lead at East Lake but stumbled with a 73 on the final day. He still had a chance to win the Cup, though. Rory McIlroy, Kevin Chappell and Ryan Moore finished in a three-way tie for first. Had Chappell or Moore won the playoff, the Cup was Johnson’s. But McIlroy prevailed, earning the FedExCup triumph.

Some SpeCial ShotS Johnson had a five-shot cushion heading into a Labor Day Monday finish, but Thomas and Xander Schauffele managed to inject some drama into the final 18 holes. It took some special shots by Johnson down the stretch—a key 20-footer to save par at 13, a crisp 5-iron onto the putting surface at the daunting 234-yard 15th, a clever sand wedge shot over the steep face of a fairway bunker at 16—for Johnson to pull away from the rest. Johnson finished the week at 21-under. His final margin of victory was three shots over Thomas and Schauffele and four over Rahm. All three players shot 66s in the final round. Scottie Scheffler ended a strong rookie campaign by finishing solo fifth. w w w.p gat our.com