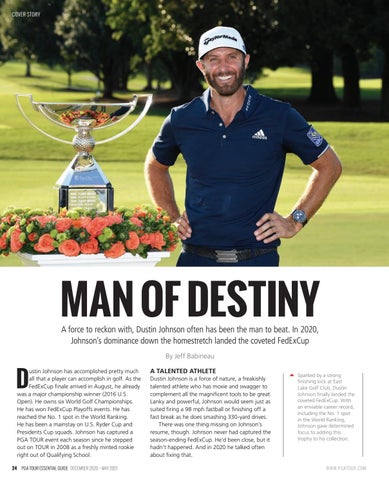 Man of Destiny A force to reckon with, Dustin Johnson often has been the man to beat. In 2020, Johnson’s dominance down the homestretch landed the coveted FedExCup By Jeff Babineau

ustin Johnson has accomplished pretty much all that a player can accomplish in golf. As the FedExCup finale arrived in August, he already was a major championship winner (2016 U.S. Open). He owns six World Golf Championships. He has won FedExCup Playoffs events. He has reached the No. 1 spot in the World Ranking. He has been a mainstay on U.S. Ryder Cup and Presidents Cup squads. Johnson has captured a PGA TOUR event each season since he stepped out on TOUR in 2008 as a freshly minted rookie right out of Qualifying School.

A tAlented Athlete Dustin Johnson is a force of nature, a freakishly talented athlete who has moxie and swagger to complement all the magnificent tools to be great. Lanky and powerful, Johnson would seem just as suited firing a 98 mph fastball or finishing off a fast break as he does smashing 330-yard drives. There was one thing missing on Johnson’s resume, though. Johnson never had captured the season-ending FedExCup. He’d been close, but it hadn’t happened. And in 2020 he talked often about fixing that.

Sparked by a strong finishing kick at East Lake Golf Club, Dustin Johnson finally landed the coveted FedExCup. With an enviable career record, including the No. 1 spot in the World Ranking, Johnson gave determined focus to adding this trophy to his collection.