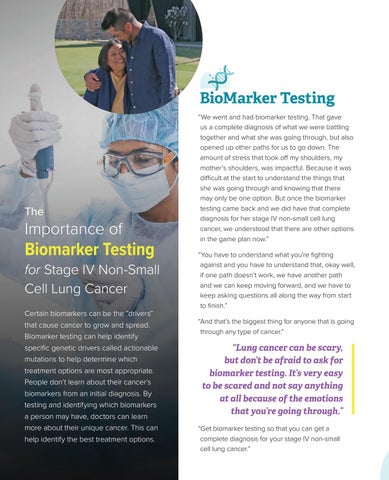 for Stage IV Non-Small Cell Lung Cancer Certain biomarkers can be the “drivers” that cause cancer to grow and spread. Biomarker testing can help identify specific genetic drivers called actionable mutations to help determine which treatment options are most appropriate. People don’t learn about their cancer’s biomarkers from an initial diagnosis. By testing and identifying which biomarkers a person may have, doctors can learn more about their unique cancer. This can help identify the best treatment options.

“We went and had biomarker testing. That gave us a complete diagnosis of what we were battling together and what she was going through, but also opened up other paths for us to go down. The amount of stress that took off my shoulders, my mother’s shoulders, was impactful. Because it was difficult at the start to understand the things that she was going through and knowing that there may only be one option. But once the biomarker testing came back and we did have that complete diagnosis for her stage IV non-small cell lung cancer, we understood that there are other options in the game plan now.” “You have to understand what you’re fighting against and you have to understand that, okay well, if one path doesn’t work, we have another path and we can keep moving forward, and we have to keep asking questions all along the way from start to finish.” “And that’s the biggest thing for anyone that is going through any type of cancer.”

“Lung cancer can be scary, but don’t be afraid to ask for biomarker testing. It’s very easy to be scared and not say anything at all because of the emotions that you’re going through.” “Get biomarker testing so that you can get a complete diagnosis for your stage IV non-small cell lung cancer.”