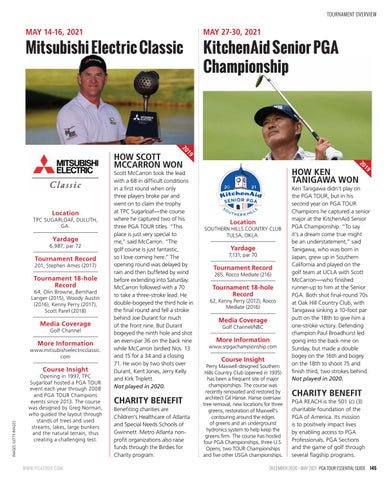 Opening in 1997, TPC Sugarloaf hosted a PGA TOUR event each year through 2008 and PGA TOUR Champions events since 2013. The course was designed by Greg Norman, who guided the layout through stands of trees and used streams, lakes, large bunkers and the natural terrain, thus creating a challenging test.

Scott McCarron took the lead with a 68 in difficult conditions in a first round when only three players broke par and went on to claim the trophy at TPC Sugarloaf—the course where he captured two of his three PGA TOUR titles. “This place is just very special to me,” said McCarron. “The golf course is just fantastic, so I love coming here.” The opening round was delayed by rain and then buffeted by wind before extending into Saturday. McCarron followed with a 70 to take a three-stroke lead. He double-bogeyed the third hole in the final round and fell a stroke behind Joe Durant for much of the front nine. But Durant bogeyed the ninth hole and shot an even-par 36 on the back nine while McCarron birdied Nos. 13 and 15 for a 34 and a closing 71. He won by two shots over Durant, Kent Jones, Jerry Kelly and Kirk Triplett. Not played in 2020.

Ken Tanigawa didn’t play on the PGA TOUR, but in his second year on PGA TOUR Champions he captured a senior major at the KitchenAid Senior PGA Championship. “To say it’s a dream come true might be an understatement,” said Tanigawa, who was born in Japan, grew up in Southern California and played on the golf team at UCLA with Scott McCarron—who finished runner-up to him at the Senior PGA. Both shot final-round 70s at Oak Hill Country Club, with Tanigawa sinking a 10-foot par putt on the 18th to give him a one-stroke victory. Defending champion Paul Broadhurst led going into the back nine on Sunday, but made a double bogey on the 16th and bogey on the 18th to shoot 75 and finish third, two strokes behind. Not played in 2020.

CHARITY BENEFIT PGA REACH is the 501 (c) (3) charitable foundation of the PGA of America. Its mission is to positively impact lives by enabling access to PGA Professionals, PGA Sections and the game of golf through several flagship programs.