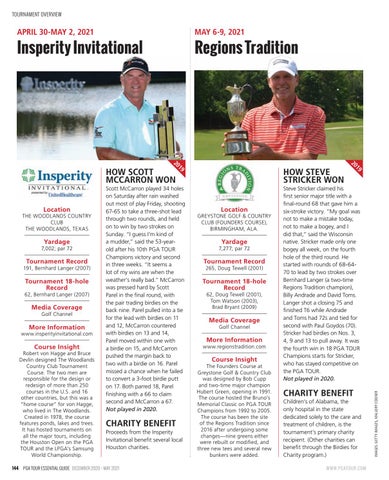 Robert von Hagge and Bruce Devlin designed The Woodlands Country Club Tournament Course. The two men are responsible for the design or redesign of more than 250 courses in the U.S. and 16 other countries, but this was a “home course” for von Hagge, who lived in The Woodlands. Created in 1978, the course features ponds, lakes and trees. It has hosted tournaments on all the major tours, including the Houston Open on the PGA TOUR and the LPGA’s Samsung World Championship. 144

Scott McCarron played 34 holes on Saturday after rain washed out most of play Friday, shooting 67-65 to take a three-shot lead through two rounds, and held on to win by two strokes on Sunday. “I guess I’m kind of a mudder,” said the 53-yearold after his 10th PGA TOUR Champions victory and second in three weeks. “It seems a lot of my wins are when the weather’s really bad.” McCarron was pressed hard by Scott Parel in the final round, with the pair trading birdies on the back nine. Parel pulled into a tie for the lead with birdies on 11 and 12, McCarron countered with birdies on 13 and 14, Parel moved within one with a birdie on 15, and McCarron pushed the margin back to two with a birdie on 16. Parel missed a chance when he failed to convert a 3-foot birdie putt on 17. Both parred 18, Parel finishing with a 66 to claim second and McCarron a 67. Not played in 2020.

Steve Stricker claimed his first senior major title with a final-round 68 that gave him a six-stroke victory. “My goal was not to make a mistake today, not to make a bogey, and I did that,” said the Wisconsin native. Stricker made only one bogey all week, on the fourth hole of the third round. He started with rounds of 68-6470 to lead by two strokes over Bernhard Langer (a two-time Regions Tradition champion), Billy Andrade and David Toms. Langer shot a closing 75 and finished T6 while Andrade and Toms had 72s and tied for second with Paul Goydos (70). Stricker had birdies on Nos. 3, 4, 9 and 13 to pull away. It was the fourth win in 18 PGA TOUR Champions starts for Stricker, who has stayed competitive on the PGA TOUR. Not played in 2020.

The Founders Course at Greystone Golf & Country Club was designed by Bob Cupp and two-time major champion Hubert Green, opening in 1991. The course hosted the Bruno’s Memorial Classic on PGA TOUR Champions from 1992 to 2005. The course has been the site of the Regions Tradition since 2016 after undergoing some changes—nine greens either were rebuilt or modified, and three new tees and several new bunkers were added.

CHARITY BENEFIT Children’s of Alabama, the only hospital in the state dedicated solely to the care and treatment of children, is the tournament’s primary charity recipient. (Other charities can benefit through the Birdies for Charity program.)