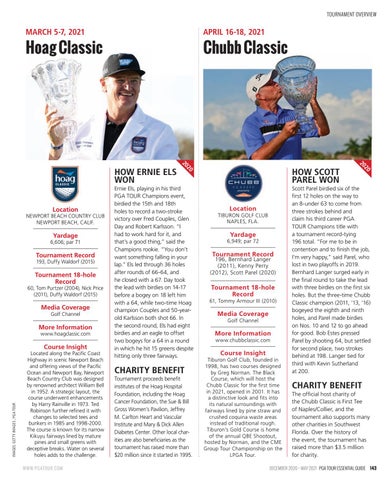 Located along the Pacific Coast Highway in scenic Newport Beach and offering views of the Pacific Ocean and Newport Bay, Newport Beach Country Club was designed by renowned architect William Bell in 1952. A strategic layout, the course underwent enhancements by Harry Rainville in 1973. Ted Robinson further refined it with changes to selected tees and bunkers in 1985 and 1998-2000. The course is known for its narrow Kikuyu fairways lined by mature pines and small greens with deceptive breaks. Water on several holes adds to the challenge. W W W.P GAT OUR.COM

Ernie Els, playing in his third PGA TOUR Champions event, birdied the 15th and 18th holes to record a two-stroke victory over Fred Couples, Glen Day and Robert Karlsson. “I had to work hard for it, and that’s a good thing,” said the Champions rookie. “You don’t want something falling in your lap.” Els led through 36 holes after rounds of 66-64, and he closed with a 67. Day took the lead with birdies on 14-17 before a bogey on 18 left him with a 64, while two-time Hoag champion Couples and 50-yearold Karlsson both shot 66. In the second round, Els had eight birdies and an eagle to offset two bogeys for a 64 in a round in which he hit 15 greens despite hitting only three fairways.

CHARITY BENEFIT Tournament proceeds benefit institutes of the Hoag Hospital Foundation, including the Hoag Cancer Foundation, the Sue & Bill Gross Women’s Pavilion, Jeffrey M. Carlton Heart and Vascular Institute and Mary & Dick Allen Diabetes Center. Other local charities are also beneficiaries as the tournament has raised more than $20 million since it started in 1995.

Tiburon Golf Club, founded in 1998, has two courses designed by Greg Norman. The Black Course, which will host the Chubb Classic for the first time in 2021, opened in 2001. It has a distinctive look and fits into its natural surroundings with fairways lined by pine straw and crushed coquina waste areas instead of traditional rough. Tiburon’s Gold Course is home of the annual QBE Shootout, hosted by Norman, and the CME Group Tour Championship on the LPGA Tour.

Scott Parel birdied six of the first 12 holes on the way to an 8-under 63 to come from three strokes behind and claim his third career PGA TOUR Champions title with a tournament record-tying 196 total. “For me to be in contention and to finish the job, I’m very happy,” said Parel, who lost in two playoffs in 2019. Bernhard Langer surged early in the final round to take the lead with three birdies on the first six holes. But the three-time Chubb Classic champion (2011, ’13, ’16) bogeyed the eighth and ninth holes, and Parel made birdies on Nos. 10 and 12 to go ahead for good. Bob Estes pressed Parel by shooting 64, but settled for second place, two strokes behind at 198. Langer tied for third with Kevin Sutherland at 200.

CHARITY BENEFIT The official host charity of the Chubb Classic is First Tee of Naples/Collier, and the tournament also supports many other charities in Southwest Florida. Over the history of the event, the tournament has raised more than $3.5 million for charity.