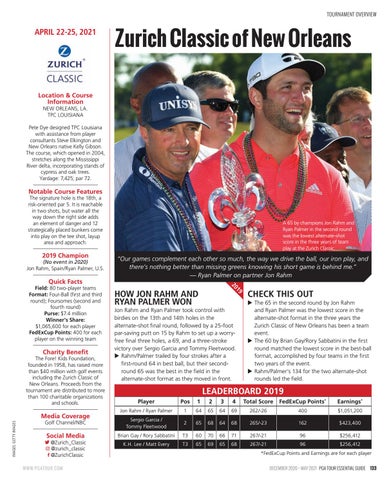 The signature hole is the 18th, a risk-oriented par 5. it is reachable in two shots, but water all the way down the right side adds an element of danger and 12 strategically placed bunkers come into play on the tee shot, layup area and approach.

The Fore! Kids Foundation, founded in 1958, has raised more than $40 million with golf events including the Zurich Classic of New Orleans. Proceeds from the tournament are distributed to more than 100 charitable organizations and schools.

Jon rahm and ryan Palmer took control with birdies on the 13th and 14th holes in the alternate-shot final round, followed by a 25-foot par-saving putt on 15 by rahm to set up a worryfree final three holes, a 69, and a three-stroke victory over sergio Garcia and Tommy Fleetwood. X rahm/Palmer trailed by four strokes after a first-round 64 in best ball, but their secondround 65 was the best in the field in the alternate-shot format as they moved in front.

cHEck tHis Out X The 65 in the second round by Jon rahm and ryan Palmer was the lowest score in the alternate-shot format in the three years the Zurich Classic of New Orleans has been a team event. X The 60 by Brian Gay/rory sabbatini in the first round matched the lowest score in the best-ball format, accomplished by four teams in the first two years of the event. X rahm/Palmer’s 134 for the two alternate-shot rounds led the field.

“Our games complement each other so much, the way we drive the ball, our iron play, and there’s nothing better than missing greens knowing his short game is behind me.” — Ryan Palmer on partner Jon Rahm 19 20

Field: 80 two-player teams Format: Four-Ball (first and third round); Foursomes (second and fourth round) Purse: $7.4 million Winner’s Share: $1,065,600 for each player FedExCup Points: 400 for each player on the winning team

a 65 by champions Jon rahm and ryan Palmer in the second round was the lowest alternate-shot score in the three years of team play at the Zurich Classic.