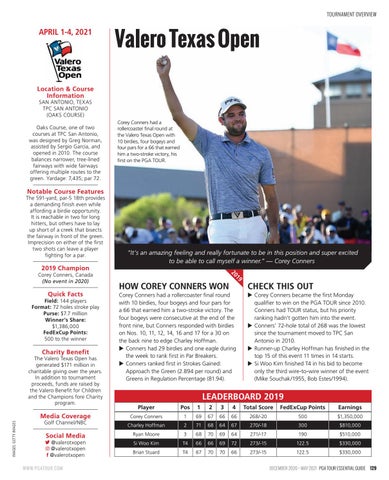 oaks Course, one of two courses at tPC San antonio, was designed by Greg norman, assisted by Sergio Garcia, and opened in 2010. the course balances narrower, tree-lined fairways with wide fairways offering multiple routes to the green. Yardage: 7,435; par 72.

Corey Conners had a rollercoaster final round at the Valero texas open with 10 birdies, four bogeys and four pars for a 66 that earned him a two-stroke victory, his first on the PGa toUR.

the 591-yard, par-5 18th provides a demanding finish even while affording a birdie opportunity. it is reachable in two for long hitters, but others have to lay up short of a creek that bisects the fairway in front of the green. imprecision on either of the first two shots can leave a player fighting for a par.

the Valero texas open has generated $171 million in charitable giving over the years. in addition to tournament proceeds, funds are raised by the Valero Benefit for Children and the Champions fore Charity program.

“It’s an amazing feeling and really fortunate to be in this position and super excited to be able to call myself a winner.” — Corey Conners

Corey Conners had a rollercoaster final round with 10 birdies, four bogeys and four pars for a 66 that earned him a two-stroke victory. the four bogeys were consecutive at the end of the front nine, but Conners responded with birdies on nos. 10, 11, 12, 14, 16 and 17 for a 30 on the back nine to edge Charley Hoffman. X Conners had 29 birdies and one eagle during the week to rank first in Par Breakers. X Conners ranked first in Strokes Gained: approach the Green (2.894 per round) and Greens in Regulation Percentage (81.94).

CHECk tHiS Out X Corey Conners became the first Monday qualifier to win on the PGa toUR since 2010. Conners had toUR status, but his priority ranking hadn’t gotten him into the event. X Conners’ 72-hole total of 268 was the lowest since the tournament moved to tPC San antonio in 2010. X Runner-up Charley Hoffman has finished in the top 15 of this event 11 times in 14 starts. X Si Woo kim finished t4 in his bid to become only the third wire-to-wire winner of the event (Mike Souchak/1955, Bob estes/1994).