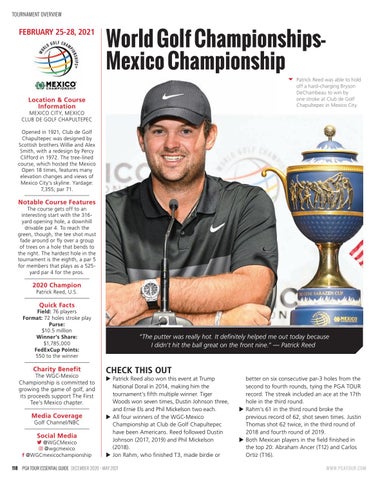 Patrick Reed was able to hold off a hard-charging Bryson DeChambeau to win by one stroke at Club de Golf Chapultepec in Mexico City.

The course gets off to an interesting start with the 316yard opening hole, a downhill drivable par 4. To reach the green, though, the tee shot must fade around or fly over a group of trees on a hole that bends to the right. The hardest hole in the tournament is the eighth, a par 5 for members that plays as a 525yard par 4 for the pros.

The WGC-Mexico Championship is committed to growing the game of golf, and its proceeds support The First Tee’s Mexico chapter.

“The putter was really hot. It definitely helped me out today because I didn’t hit the ball great on the front nine.” — Patrick Reed