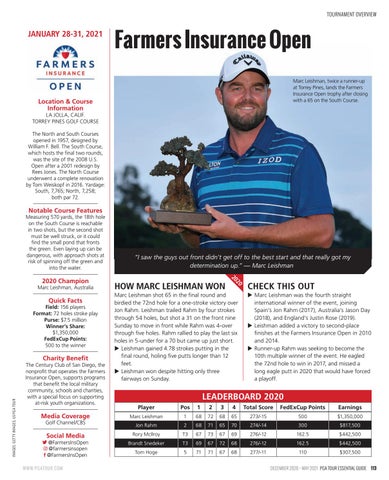 LA JOLLA, CALIF. TORREY PINES GOLF COURSE The North and South Courses opened in 1957, designed by William F. Bell. The South Course, which hosts the final two rounds, was the site of the 2008 U.S. Open after a 2001 redesign by Rees Jones. The North Course underwent a complete renovation by Tom Weiskopf in 2016. Yardage: South, 7,765; North, 7,258; both par 72.

Measuring 570 yards, the 18th hole on the South Course is reachable in two shots, but the second shot must be well struck, or it could find the small pond that fronts the green. Even laying up can be dangerous, with approach shots at risk of spinning off the green and into the water.

The Century Club of San Diego, the nonprofit that operates the Farmers Insurance Open, supports programs that benefit the local military community, schools and charities, with a special focus on supporting at-risk youth organizations.

“I saw the guys out front didn’t get off to the best start and that really got my determination up.” — Marc Leishman

Marc Leishman shot 65 in the final round and birdied the 72nd hole for a one-stroke victory over Jon Rahm. Leishman trailed Rahm by four strokes through 54 holes, but shot a 31 on the front nine Sunday to move in front while Rahm was 4-over through five holes. Rahm rallied to play the last six holes in 5-under for a 70 but came up just short.  Leishman gained 4.78 strokes putting in the final round, holing five putts longer than 12 feet.  Leishman won despite hitting only three fairways on Sunday.

CHECK THIS OUT  Marc Leishman was the fourth straight international winner of the event, joining Spain’s Jon Rahm (2017), Australia’s Jason Day (2018), and England’s Justin Rose (2019).  Leishman added a victory to second-place finishes at the Farmers Insurance Open in 2010 and 2014.  Runner-up Rahm was seeking to become the 10th multiple winner of the event. He eagled the 72nd hole to win in 2017, and missed a long eagle putt in 2020 that would have forced a playoff.