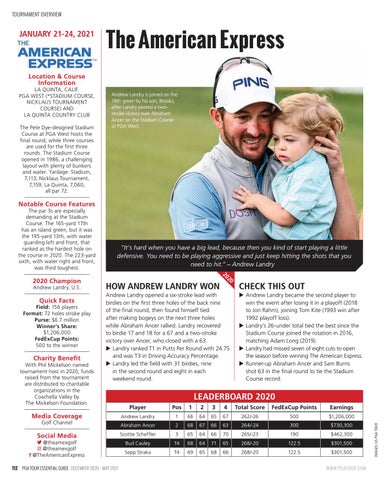 Andrew Landry is joined on the 18th green by his son, Brooks, after Landry posted a twostroke victory over Abraham Ancer on the Stadium Course at PGA West.

With Phil Mickelson named tournament host in 2020, funds raised from the tournament are distributed to charitable organizations in the Coachella Valley by The Mickelson Foundation.

Andrew Landry opened a six-stroke lead with birdies on the first three holes of the back nine of the final round, then found himself tied after making bogeys on the next three holes while Abraham Ancer rallied. Landry recovered to birdie 17 and 18 for a 67 and a two-stroke victory over Ancer, who closed with a 63.  Landry ranked T1 in Putts Per Round with 24.75 and was T3 in Driving Accuracy Percentage.  Landry led the field with 31 birdies, nine in the second round and eight in each weekend round.

CHECK THIS OUT  Andrew Landry became the second player to win the event after losing it in a playoff (2018 to Jon Rahm), joining Tom Kite (1993 win after 1992 playoff loss).  Landry’s 26-under total tied the best since the Stadium Course joined the rotation in 2016, matching Adam Long (2019).  Landry had missed seven of eight cuts to open the season before winning The American Express.  Runner-up Abraham Ancer and Sam Burns shot 63 in the final round to tie the Stadium Course record.

“It’s hard when you have a big lead, because then you kind of start playing a little defensive. You need to be playing aggressive and just keep hitting the shots that you need to hit.” – Andrew Landry

The par 3s are especially demanding at the Stadium Course. The 165-yard 17th has an island green, but it was the 195-yard 13th, with water guarding left and front, that ranked as the hardest hole on the course in 2020. The 223-yard sixth, with water right and front, was third toughest.