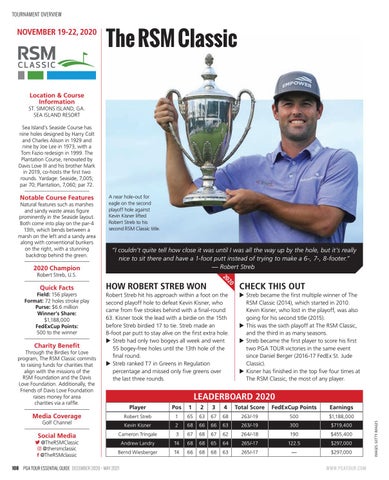 ST. SIMONS ISLAND, GA. SEA ISLAND RESORT Sea Island’s Seaside Course has nine holes designed by Harry Colt and Charles Alison in 1929 and nine by Joe Lee in 1973, with a Tom Fazio redesign in 1999. The Plantation Course, renovated by Davis Love III and his brother Mark in 2019, co-hosts the first two rounds. Yardage: Seaside, 7,005; par 70; Plantation, 7,060; par 72. Natural features such as marshes and sandy waste areas figure prominently in the Seaside layout. Both come into play on the par-4 13th, which bends between a marsh on the left and a sandy area along with conventional bunkers on the right, with a stunning backdrop behind the green.

A near hole-out for eagle on the second playoff hole against Kevin Kisner lifted Robert Streb to his second RSM Classic title.

“I couldn’t quite tell how close it was until I was all the way up by the hole, but it’s really nice to sit there and have a 1-foot putt instead of trying to make a 6-, 7-, 8-footer.” — Robert Streb

Robert Streb hit his approach within a foot on the second playoff hole to defeat Kevin Kisner, who came from five strokes behind with a final-round 63. Kisner took the lead with a birdie on the 15th before Streb birdied 17 to tie. Streb made an 8-foot par putt to stay alive on the first extra hole.  Streb had only two bogeys all week and went 55 bogey-free holes until the 13th hole of the final round.  Streb ranked T7 in Greens in Regulation percentage and missed only five greens over the last three rounds.

CHECK THIS OUT  Streb became the first multiple winner of The RSM Classic (2014), which started in 2010. Kevin Kisner, who lost in the playoff, was also going for his second title (2015).  This was the sixth playoff at The RSM Classic, and the third in as many seasons.  Streb became the first player to score his first two PGA TOUR victories in the same event since Daniel Berger (2016-17 FedEx St. Jude Classic).  Kisner has finished in the top five four times at The RSM Classic, the most of any player.