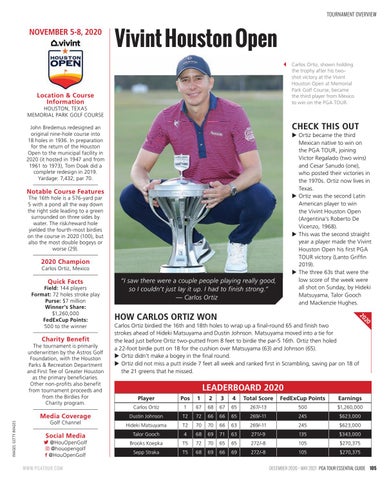  Ortiz became the third Mexican native to win on the PGA TOUR, joining Victor Regalado (two wins) and Cesar Sanudo (one), who posted their victories in the 1970s. Ortiz now lives in Texas.  Ortiz was the second Latin American player to win the Vivint Houston Open (Argentina’s Roberto De Vicenzo, 1968).  This was the second straight year a player made the Vivint Houston Open his first PGA TOUR victory (Lanto Griffin 2019).  The three 63s that were the low score of the week were all shot on Sunday, by Hideki Matsuyama, Talor Gooch and Mackenzie Hughes.

Notable Course Features The 16th hole is a 576-yard par 5 with a pond all the way down the right side leading to a green surrounded on three sides by water. The risk/reward hole yielded the fourth-most birdies on the course in 2020 (100), but also the most double bogeys or worse (29).

The tournament is primarily underwritten by the Astros Golf Foundation, with the Houston Parks & Recreation Department and First Tee of Greater Houston as the primary beneficiaries. Other non-profits also benefit from tournament proceeds and from the Birdies For Charity program.

“I saw there were a couple people playing really good, so I couldn’t just lay it up. I had to finish strong.” — Carlos Ortiz

Carlos Ortiz, shown holding the trophy after his twoshot victory at the Vivint Houston Open at Memorial Park Golf Course, became the third player from Mexico to win on the PGA TOUR.

Carlos Ortiz birdied the 16th and 18th holes to wrap up a final-round 65 and finish two strokes ahead of Hideki Matsuyama and Dustin Johnson. Matsuyama moved into a tie for the lead just before Ortiz two-putted from 8 feet to birdie the par-5 16th. Ortiz then holed a 22-foot birdie putt on 18 for the cushion over Matsuyama (63) and Johnson (65).  Ortiz didn’t make a bogey in the final round.  Ortiz did not miss a putt inside 7 feet all week and ranked first in Scrambling, saving par on 18 of the 21 greens that he missed.