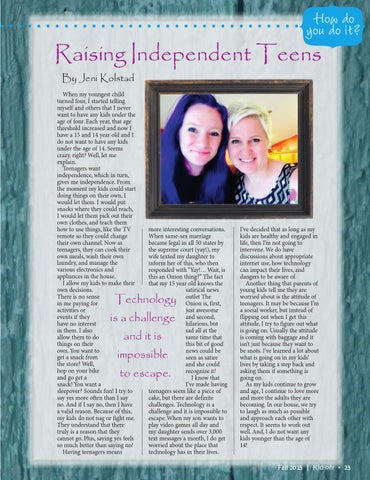 How do you do it? Raising Independent Teens By Jeni Kolstad

When my youngest child turned four, I started telling myself and others that I never want to have any kids under the age of four. Each year, that age threshold increased and now I have a 15 and 14 year old and I do not want to have any kids under the age of 14. Seems crazy, right? Well, let me explain. Teenagers want independence, which in turn, gives me independence. From the moment my kids could start doing things on their own, I would let them. I would put snacks where they could reach, I would let them pick out their own clothes, and teach them how to use things, like the TV remote so they could change their own channel. Now as teenagers, they can cook their own meals, wash their own laundry, and manage the various electronics and appliances in the house. I allow my kids to make their own decisions. There is no sense in me paying for activities or events if they have no interest in them. I also allow them to do things on their own. You want to get a snack from the store? Well, hop on your bike and go get a snack! You want a sleepover? Sounds fun! I try to say yes more often than I say no. And if I say no, then I have a valid reason. Because of this, my kids do not nag or fight me. They understand that there truly is a reason that they cannot go. Plus, saying yes feels so much better than saying no! Having teenagers means

more interesting conversations. When same-sex marriage became legal in all 50 states by the supreme court (yay!), my wife texted my daughter to inform her of this, who then responded with “Yay!… Wait, is this an Onion thing?” The fact that my 15 year old knows the satirical news outlet The Onion is, first, just awesome and second, hilarious, but sad all at the same time that this bit of good news could be seen as satire and she could recognize it! I know that I’ve made having teenagers seem like a piece of cake, but there are definite challenges. Technology is a challenge and it is impossible to escape. When my son wants to play video games all day and my daughter sends over 3,000 text messages a month, I do get worried about the place that technology has in their lives.

is a challenge and it is

I’ve decided that as long as my kids are healthy and engaged in life, then I’m not going to intervene. We do have discussions about appropriate internet use, how technology can impact their lives, and dangers to be aware of. Another thing that parents of young kids tell me they are worried about is the attitude of teenagers. It may be because I’m a social worker, but instead of flipping out when I get this attitude, I try to figure out what is going on. Usually the attitude is coming with baggage and it isn’t just because they want to be snots. I’ve learned a lot about what is going on in my kids’ lives by taking a step back and asking them if something is going on. As my kids continue to grow and age, I continue to love more and more the adults they are becoming. In our house, we try to laugh as much as possible and approach each other with respect. It seems to work out well. And, I do not want any kids younger than the age of 14! Fall 2015 | Kid-oh! • 25