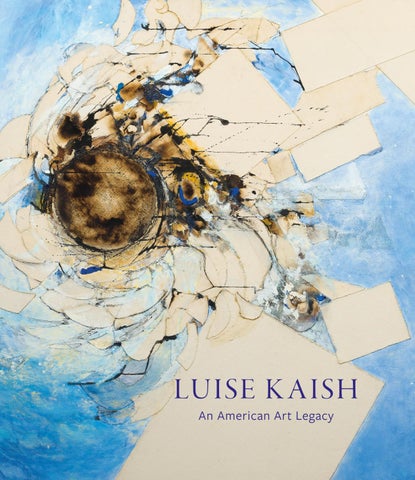 Essays by Daniel Belasco, Samuel D. Gruber, Eleanor Heartney, Norman L. Kleeblatt, Gail Levin, and Roger Lipsey Luise Kaish: An American Art Legacy celebrates the career and legacy of the modernist sculptor, painter, collagist, and educator Luise Clayborn Kaish (1925–2013). Kaish was a key figure in the New York art scene of the late twentieth century, and her multidisciplinary and process-oriented work contributed to various artistic discourses at the time. The strength and breadth of her oeuvre, her influential role in education, and the prestigious awards she received in recognition of her work set her apart as an early female leader in the arts. She will be remembered for her immense talent, highly individual point of view, pursuit of the sublime, keen execution, and passion for life, which, despite the tides of changing tastes, will remain forever significant. This volume brings together nearly all of her works. Essays covering Kaish’s life and career, her artistic practices, her lifelong interest in the spiritual and metaphysical, and her work as an educator are interspersed with full-page plates. The book also includes an illustrated chronology, an exhibition history, and a bibliography.

Roger Lipsey is a biographer, art historian, editor, and translator.

Landscapes In the 1990s, until her death in 2013, Luise Kaish moved away from abstraction, producing innumerable land- and skyscapes in watercolor, acrylic, and oil. These works are remarkable in that she began utilizing ultra-bright, Fauve-like colors for the first time in her decades-long career. As she explained in 2012, “I am drawn to painting and color that defy assumptions, cumulative layers, pulsating rhythms and vibrations of color at maximum saturation pervading the works, and alternating strokes that set the color in motion. I use repetition of color and shape to intensify those aspects.”1 Kaish often referred to Claude Monet and William Blake as inspirations for her landscapes. She was inspired, too, by the high skies over the Hudson River, the Hamptons on Long Island, and southern Florida. Her favorite point of inspiration at this time was an off-the-path secluded grove of very old flower trees in Central Park, a place she called her “allée,” to which she returned again and again. Her love of nature started during her childhood, when she produced drawings of “the flora and fauna in our garden, the nearby marshlands and ocean, the skies of changing seasons—nature in all its miraculous transformative abundance.”2 Like the transcendentalists, Kaish had a deep gratitude and appreciation for nature, not only for aesthetic purposes, but also as a tool to observe and understand the structured inner workings of the natural world. Kaish had an explicit desire to have her land- and seascape paintings seen as visualizations of the divine—or manifestations of the sublime. As she explained in 2012, “These days, as I paint from my studio windows, the rising dawn or the turbulent motion filled clouds that sweep the skis on crossing the Hudson, I am reminded of the Transcendentalists and return to the lines of William Wordsworth: the sense of the sublime in the light of setting suns.”3 Towards the end of her life, while recuperating from various illnesses, she would paint the skies from her studio window, explaining, “as I looked at the skies I was reminded of the story of the poet Schiller who before his death could only see the sky from his bed while he wrote his poetry.” 4

Insightfully, she also said of her landscapes, “I feel that these paintings, which seek to capture the most ephemeral and passing of moments and movements are expressive of the most profound gatherings of my experience.” 5 They were for her the culmination of a life’s work. Kaish presented the land- and skyscape paintings in a solo exhibition at the Century Association in 1998, and throughout the 1990s and 2000s at the National Academy of Design, where she was a member. In 2012, the Century Association held a two-person exhibition dedicated to the work of Luise and Morton Kaish. Of Luise’s work, Tom Freudenheim asked: “Do the landscapes and skies celebrate Constable&#39;s glorying in nature&#39;s peace or a Fauvist examination of nature&#39;s harsh complexities? But perhaps there are also echoes of late nineteenth-century symbolist meanings lurking in Hodler-like landscapes. Do we see references to early Mondrian trees in wonderful forested vistas, as clues to the layered abstractions toward which she develops her compositions?”6

through northern Italy, Belgium, Switzerland, southern France, and Spain (Fig. 71). 1952 Begins working at the Sculpture Center in Queens, New York, alongside a group of four other women, including Katherine Nash, Dorothy Robbins, Barbara Lekberg, and Lin Emery, who are all experimenting with welding.

1955 Exhibits in a two-person show with sculptor William Muir at the Sculpture Center. Among the works on view are Desert Specter and And Behold A Ladder, which reflect the influence of the Western desert landscape, as well as a series of small sculptures of children at play. Fig. 71  Luise and Morton’s first trip to Europe on the SS NIEUW Amsterdam, 1951

1956–1957 Second trip to Europe with Morton. The couple rents an apartment near the Trevi Fountain in Rome. Attends services at the Great Synagogue of Rome, which inspires a series of religious figures and prophets. Rabbi Philip Bernstein admires these works during a visit to her Rome studio and suggests a collaboration with architect Pietro Belluschi on the new Temple B’rith Kodesh in Rochester, New York. Travels to Egypt, Greece, Dachau, and Normandy.

1958 Returns to New York and moves into a skylit loft studio on MacDougal Street in Greenwich Village. The studio is located above the Rienzi coffee shop, where Allen Ginsberg reads poetry, and a few blocks away from the Cedar Tavern, Hans Hofmann’s art school, and Larry Rivers’s studio. Exhibits in first solo show at the Sculpture Center and receives critical acclaim from Robert Dash and Irving Sandler.

1964 The Ark of Revelation is installed and dedicated in March. The Rochester Times-Union describes it as “one of the great examples of ecclesiastical art in America.” 1 Travels to Portugal in the summer. Studies Manueline architecture, visits the local bronze-casting facilities, and creates landscape sketches (Fig. 75). 1962–1966 Participates in a series of prestigious group exhibitions, including the Whitney Museum of American Art Annual Exhibition 1962, alongside Louise Nevelson, Isamu Noguchi, and Marisol; the Whitney Museum of American Art 1964 Annual Exhibition of Contemporary American Sculpture, alongside Bruce Conner, Joseph Cornell, Claire Falkenstein, David Hare, and Edward Kienholz; and the historical exhibition Women Artists of America, 1707–1964, at the Newark Museum.