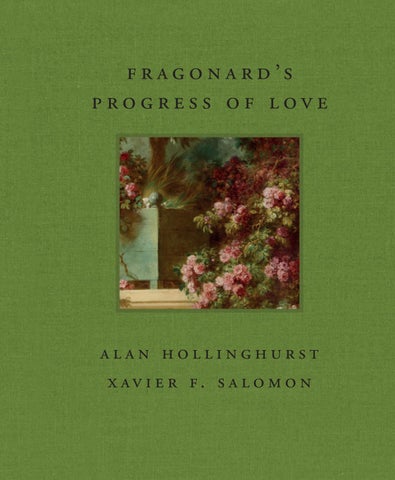 ACKNOWLEDGMENTS My greatest thanks go to Alan Hollinghurst for contributing an essay that is both inspired and lyrical. I also thank my two predecessors here at the Frick, Colin B. Bailey and the late Edgar Munhall. Researching and writing about the Fragonard Room seems to be a requirement of every chief curator here, and their studies and publications on the subject provided the foundation for my work. I could not have written my essay without the path so brilliantly forged by them. Joseph Baillio, Marie-Laure Buku-Pongo, Giulio Dalvit, Michał Przygoda, David Pullins, Aimee Ng, Perrin Stein, and Aaron Wile provided fundamental support, helping with my research, answering questions, and reading drafts of my essay. My heartfelt gratitude goes to all of them. My work on this project took place during a year marked by a world pandemic, as well as the packing and moving of the Fragonard Room from The Frick Collection to Frick Madison. During this difficult time, my summer travel to France in the footsteps of Fragonard remains an unforgettable highlight, as well as a moment of much-needed respite. In Paris, I would like to thank Steeve Bovet, Vincent Delieuvin, Mathieu Deldicque, Sophie Guedj, Mario Tavella, Charlotte Vignon, and the staff of the Archives Nationales and the Archives Départementales des Yvelines, in particular Yoan Thomas. In Grasse, I was welcomed and aided by Carole Blumenfeld, Agnès and Françoise Costa, Mathilde Despois, Emmanuelle Fournier, and Diane Saurat-Rognoni. I would like to thank a number of colleagues at the Frick: Sally Brazil, Joseph Coscia Jr., Allison Galea, Joe Godla, Joe Jordan, Bailey Keiger, Pat King, Rebecca Leonard, Julie Ludwig, and, in particular, Michaelyn Mitchell and Christopher Snow Hopkins. Adrian Kitzinger provided the maps for the different iterations of the room. Thank you also to Christopher Apostle, Benedetta Craveri, Keith Christiansen, Alvar González-Palacios, Guillaume Kientz, Matteo Lafranconi, Satish Padiyar, Furio Rinaldi, Roberto Valeriani, and George Wachter. As always, none of this would have been conceivable without M. Xavier F. Salomon Deputy Director and Peter Jay Sharp Chief Curator, The Frick Collection

Littleneck clams, consommé Célestine, and planked shad roe accompanied by tomatoes and cucumbers. Saddle of spring lamb Régence with green peas and potatoes Parisienne; cold Virginia ham Strasbourgeoise and cheese straws; chicken and asparagus salad. Soufflé ice cream Bénédictine, gâteau Vatel, and coffee. While Mr. Gibson played the organ and Miss Case sang, these were the courses served at a dinner for twenty-five on Monday, May 22, 1916, at 1 East 70th Street.2 Among those in attendance were prominent businessmen: Edward Julius Berwind, John G. Johnson, John S. Phipps, and John D. Rockefeller Jr. Hosted by Henry Clay Frick in his newly built mansion, the dinner was held in honor of John Pierpont “Jack” Morgan Jr.—son and heir of John Pierpont Morgan—and in celebration of the installation, in the Drawing Room of the mansion, of the canvases Frick had acquired a year earlier from Morgan. The cycle of paintings, known as The Progress of Love, by the French artist Jean-Honoré Fragonard (1732–1806), had decorated a room in John Pierpont Morgan’s house in London from 1905 to 1912 and had been inherited by his son. Between February and March 1915, Frick purchased the cycle for $1,250,000.3 Over the next year, the paintings were installed in the house, and the dinner was something of an unofficial unveiling of the space (fig. 1). 21

The Painter—Jean-Honoré Fragonard According to Edmond and Jules de Goncourt, France had no praiseworthy poets in the eighteenth century. The brothers believed that France’s “only two poets were two painters: Watteau and Fragonard.”6 The second of these artists was, in their haunting description, “the free storyteller, the amoroso gallant, pagan, playful; Gallic in mischievousness, almost Italian in genius, French in spirit.”7 Fragonard has been celebrated as a libertine artist, as a free spirit, as the painter who famously was supposed to have declared, “I would paint with my ass.”8 And yet, as Satish Padiyar remarked in the most recent book on the painter, he leaves “the impression of a fugitive and ungraspable identity” (fig. 6).9 Jean-Honoré Fragonard was born in Grasse, in Provence, on April 4, 1732.10 He was the only child of François Fragonard and Françoise Petit, who were active in the glove-making and tanning industry of the town. For business reasons, the family moved to Paris in 1738. A decade later, young Fragonard studied in the workshops of Chardin and Boucher, two of the

When the pavilion was inaugurated, however, its decoration was not altogether finished. Painters under Ledoux’s direction were still at work in the rooms. In the salon ovale, Gabriel Briard painted the ceiling, while Pierre Restout decorated that of the salon en cul-de-four with clouds over a blue sky. It was for this same room that Du Barry and Ledoux conceived the idea of commissioning four large canvases from Fragonard, canvases that were the origin of the cycle now known as The Progress of Love. The painter worked on them between the summer of 1771 and the late spring of 1772.41 Between January and June 1771, the carpenter Denis-Nicolas Carbillet, who also served as a model-maker for Ledoux, provided “four large stretchers for the painting of M. Flagonard [sic], two of which are curved.”42 Fragonard was paid 1,200 livres between June 24 and September 2, 1771.43 This payment, the only one to the painter, is rather low, so it is likely that it was either a 53

of the revolution, Fragonard—possibly on the advice of his Maubert cousins and using the knowledge of classical antiquity assimilated after two trips to Italy—clearly produced a large decorative scheme linked to contemporaneous events and the potential future of his country. At the heart of the building, adjacent to the staircase, was the main salon of the house and its largest room. Fragonard decided to repurpose the four Louveciennes canvases, which lay rolled up in his Louvre studio, for this room. Did he travel to Grasse with the four canvases in early 1790? Or did he send for them later that year? Was it Fragonard’s idea? Or a commission from the Maubert family? Did Fragonard travel to Grasse to escape Paris and the uncertainty of revolutionary times? Or did the Mauberts purchase the Du Barry canvases for their house and ask Fragonard to travel to Grasse with

Fig. 51 The Fragonard Room at The Frick Collection

on the same space, and Frick’s urgency and irritable temper proved an explosive mixture, leading to a number of disagreements over the installation of the room. As the room took shape, between 1915 and 1916, Decour claimed to have a team of sixty-five people working on the project in Paris.114 The canvases were installed between March 13 and early May 1916. (The recent removal of the canvases for the renovation of the museum has revealed extensive inscriptions on the walls of the rooms. As the workers installed the wooden paneling and the canvases, they left instructions scribbled on the walls, and some of the workers signed their names; these writings had been hidden for the past century.) By late May of 1916, the room was ready to be inaugurated, and Frick hosted a dinner in honor of Jack Morgan, the previous owner of the canvases. Frick was particularly proud of the room. That summer, on June 14, 1916, he wrote to Decour: “I am glad to say that I think Fragonard would be well pleased with the setting of his pictures” (fig. 51).115 Fragonard is not likely to have approved of a number of decisions made by Frick and the team who installed the canvases. The order in which they were displayed in the Drawing Room—now the Fragonard Room—at 1 East 70th Street followed, for the most part, the order in which they were shown at Princes Gate and at the Metropolitan Museum exhibition of Morgan’s collection (fig. 52). The two largest canvases—The Meeting and The Lover Crowned— were placed on the longest wall flanking the chimneypiece (instead of a door at Princes Gate). The other two pairs of canvases—The Pursuit and Love Letters, and Reverie and Love Triumphant—were also maintained as groups, but, instead of flanking doors or a chimneypiece, as they did in London, they were placed together as two pairs next to the two already existing doors. The four overdoors, which in London had been placed over two doors, a window, and a mirror, were divided in New York over the two doors and the two mirrors flanking the central window. Having been shortened in London, they were restored to their original dimensions, since the ceiling of the Drawing Room at 1 East 70th Street was higher than that of Morgan’s room at Princes Gate. The original positioning of the canvases, flanking doors at Louveciennes and at Grasse, was largely lost with the installation of the paintings in London, but, by the time they arrived in New York, that order and the relationship between the works was lost entirely. Once again, the room that was destined to house the Fragonard paintings looked out on a garden, and beyond Fifth Avenue, to Central Park. Compared to the Morgan installation of the paintings, the