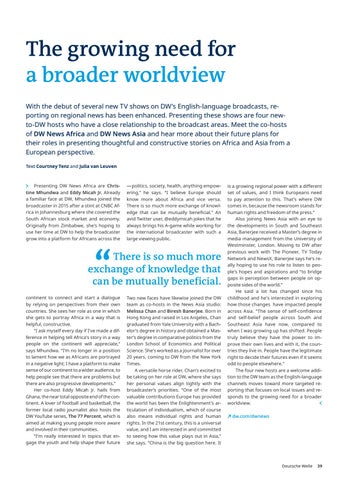 The growing need for a broader worldview With the debut of several new TV shows on DW’s English-language broadcasts, reporting on regional news has been enhanced. Presenting these shows are four newto-DW hosts who have a close relationship to the broadcast areas. Meet the co-hosts of DW News Africa and DW News Asia and hear more about their future plans for their roles in presenting thoughtful and constructive stories on Africa and Asia from a ­European perspective. Text Courtney Tenz and Julia van Leuven

Presenting DW News Africa are Christine Mhundwa and Eddy Micah Jr. Already a familiar face at DW, Mhundwa joined the broadcaster in 2015 after a stint at CNBC Africa in Johannesburg where she covered the South African stock market and economy. Originally from Zimbabwe, she’s hoping to use her time at DW to help the broadcaster grow into a platform for Africans across the

— politics, society, health, anything empowering,” he says. “I believe Europe should know more about Africa and vice versa. There is so much more exchange of knowledge that can be mutually beneficial.” An avid Twitter user, @eddymicah jokes that he always brings his A-game while working for the international broadcaster with such a large viewing public.

There is so much more ­exchange of knowledge that can be mutually beneficial. continent to connect and start a dialogue by relying on perspectives from their own countries. She sees her role as one in which she gets to portray Africa in a way that is helpful, constructive. “I ask myself every day if I’ve made a difference in helping tell Africa’s story in a way people on the continent will appreciate,” says Mhundwa. “I’m no longer in a position to lament how we as Africans are portrayed in a negative light; I have a platform to make sense of our continent to a wider audience, to help people see that there are problems but there are also progressive developments.” Her co-host Eddy Micah Jr. hails from ­Ghana, the near total opposite end of the continent. A lover of football and basketball, the former local radio journalist also hosts the DW YouTube series, The 77 Percent, which is aimed at making young people more aware and involved in their communities. “I’m really interested in topics that engage the youth and help shape their f­ uture

Two new faces have likewise joined the DW team as co-hosts in the News Asia studio: Melissa Chan and Biresh Banerjee. Born in Hong Kong and raised in Los Angeles, Chan graduated from Yale University with a Bachelor’s degree in history and obtained a Master’s degree in comparative politics from the London School of Economics and Political Science. She’s worked as a journalist for over 20 years, coming to DW from the New York Times. A versatile horse rider, Chan’s excited to be taking on her role at DW, where she says her personal values align tightly with the broadcaster’s priorities. “One of the most valuable contributions Europe has provided the world has been the Enlightenment’s articulation of individualism, which of course also means individual rights and human rights. In the 21st century, this is a universal value, and I am interested in and committed to seeing how this value plays out in Asia,” she says. “China is the big question here. It

is a growing regional power with a different set of values, and I think Europeans need to pay attention to this. That’s where DW comes in, because the newsroom stands for human rights and freedom of the press.” Also joining News Asia with an eye to the developments in South and Southeast Asia, Banerjee received a Master’s degree in media management from the University of Westminster, London. Moving to DW after previous work with The Pioneer, TV Today Network and NewsX, Banerjee says he’s really hoping to use his role to listen to peopleʹs hopes and aspirations and “to bridge gaps in perception between people on opposite sides of the world.” He said a lot has changed since his childhood and he’s interested in exploring how those changes have impacted people across Asia. “The sense of self-confidence and self-belief people across South and Southeast Asia have now, compared to when I was growing up has shifted. People truly believe they have the power to improve their own lives and with it, the countries they live in. People have the legitimate right to decide their futures even if it seems odd to people elsewhere.” The four new hosts are a welcome addition to the DW team as the English-language channels moves toward more targeted reporting that focuses on local issues and responds to the growing need for a broader worldview. dw.com/dwnews

Our world order has become unstable. We are increasingly witnessing the rejection of global norms and values designed to safeguard lasting peace. Above all, the principle of multilateralism is slowly being eroded, as people in many countries have lost trust in international institutions and democratic systems. How do the media, politics, civil society, culture, science and business interact in this age of shifting powers? The DW Global Media Forum 2019 will explore the impact of shifting power structures on the international media landscape and evaluate opportunities and challenges arising from digitalization. This edition of Weltzeit takes up the spectrum of topics addressed at the international media conference. DW experts and prominent guest authors analyze essential aspects of these latest developments. 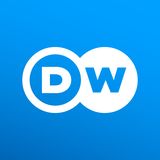