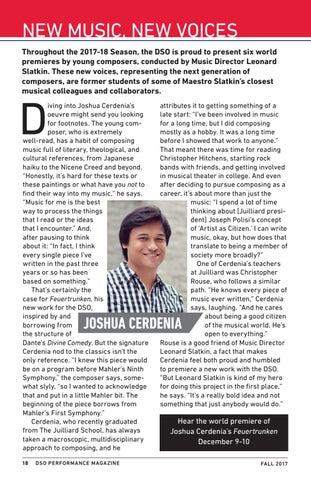 NEW MUSIC, NEW VOICES Throughout the 2017-18 Season, the DSO is proud to present six world premieres by young composers, conducted by Music Director Leonard Slatkin. These new voices, representing the next generation of composers, are former students of some of Maestro Slatkin’s closest musical colleagues and collaborators.

iving into Joshua Cerdenia’s oeuvre might send you looking for footnotes. The young composer, who is extremely well-read, has a habit of composing music full of literary, theological, and cultural references, from Japanese haiku to the Nicene Creed and beyond. “Honestly, it’s hard for these texts or these paintings or what have you not to find their way into my music,” he says. “Music for me is the best way to process the things that I read or the ideas that I encounter.” And, after pausing to think about it: “In fact, I think every single piece I’ve written in the past three years or so has been based on something.” That’s certainly the case for Feuertrunken, his new work for the DSO, inspired by and borrowing from the structure of Dante’s Divine Comedy. But the signature Cerdenia nod to the classics isn’t the only reference. “I knew this piece would be on a program before Mahler’s Ninth Symphony,” the composer says, somewhat slyly, “so I wanted to acknowledge that and put in a little Mahler bit. The beginning of the piece borrows from Mahler’s First Symphony.” Cerdenia, who recently graduated from The Juilliard School, has always taken a macroscopic, multidisciplinary approach to composing, and he

attributes it to getting something of a late start: “I’ve been involved in music for a long time, but I did composing mostly as a hobby. It was a long time before I showed that work to anyone.” That meant there was time for reading Christopher Hitchens, starting rock bands with friends, and getting involved in musical theater in college. And even after deciding to pursue composing as a career, it’s about more than just the music: “I spend a lot of time thinking about [Juilliard president] Joseph Polisi’s concept of ‘Artist as Citizen.’ I can write music, okay, but how does that translate to being a member of society more broadly?” One of Cerdenia’s teachers at Juilliard was Christopher Rouse, who follows a similar path. “He knows every piece of music ever written,” Cerdenia says, laughing. “And he cares about being a good citizen of the musical world. He’s open to everything.” Rouse is a good friend of Music Director Leonard Slatkin, a fact that makes Cerdenia feel both proud and humbled to premiere a new work with the DSO. “But Leonard Slatkin is kind of my hero for doing this project in the first place,” he says. “It’s a really bold idea and not something that just anybody would do.” 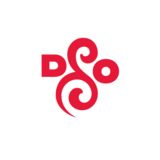