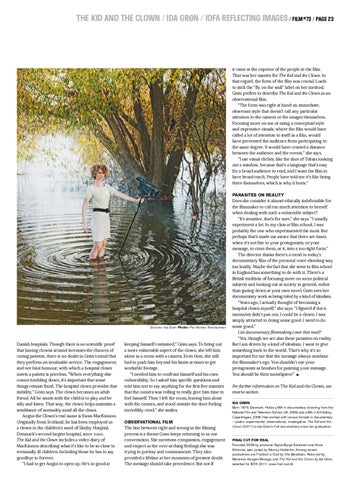 it came at the expense of the people in the film. That was her mantra for The Kid and the Clown. In that regard, the form of the film was crucial. Loath to stick the “fly on the wall” label on her method, Grøn prefers to describe The Kid and the Clown as an observational film. “The form was right at hand: an immediate, observant style that doesn’t call any particular attention to the camera or the images themselves. Focusing more on me or using a conceptual style and expressive visuals, where the film would have called a lot of attention to itself as a film, would have prevented the audience from participating to the same degree. It would have created a distance between the audience and the events,” she says. “I use visual clichés, like the shot of Tobias looking out a window, because that’s a language that’s easy for a broad audience to read, and I want the film to have broad reach. People have told me it’s like being there themselves, which is why it hurts.” PARASITES ON REALITY

Danish hospitals. Though there is no scientific proof that having clowns around increases the chances of curing patients, there is no doubt in Grøn’s mind that they perform an invaluable service. The engagement, and not least humour, with which a hospital clown meets a patient is priceless. “When everything else comes tumbling down, it’s important that some things remain fixed. The hospital clown provides that stability,” Grøn says. The clown becomes an adult friend. All he wants with the child is to play and be silly and listen. That way, the clown helps maintain a semblance of normality amid all the chaos. Angus the Clown’s real name is Ewan MacKinnon. Originally from Scotland, he has been employed as a clown in the children’s ward of Skejby Hospital, Denmark’s second-largest hospital, since 2001. The Kid and the Clown includes a video diary of MacKinnon describing what it’s like to be so close to terminally ill children. Including those he has to say goodbye to forever. “I had to get Angus to open up. He’s so good at

keeping himself contained,” Grøn says. To bring out a more vulnerable aspect of the clown, she left him alone in a room with a camera. Even then, she still had to push him beyond his limits at times to get workable footage. “I needed him to confront himself and his own vulnerability. So I asked him specific questions and told him not to say anything for the first five minutes that the camera was rolling to really give him time to feel himself. Then I left the room, leaving him alone with the camera, and stood outside the door feeling incredibly cruel,” she smiles. OBSERVATIONAL FILM

The line between right and wrong in the filming process is a theme Grøn keeps returning to in our conversation. She mentions compassion, engagement and respect as the over-arching feelings she was trying to portray and communicate. They also provided a lifeline at her moments of greatest doubt. The message should take precedence. But not if

Does she consider it almost ethically indefensible for the filmmaker to call too much attention to herself when dealing with such a vulnerable subject? “It’s sensitive, that’s for sure,” she says. “I usually experiment a lot. In my class at film school, I was probably the one who experimented the most. But perhaps that’s made me aware that there are times when it’s not fair to your protagonists, or your message, to cram them, or it, into a too-tight form.” The director thinks there’s a trend in today’s documentary film of the personal voice shouting way too loudly. Maybe the fact that she went to film school in England has something to do with it. There’s a British tradition of focusing more on socio-political subjects and looking out at society in general, rather than gazing down at your own navel. Grøn sees her documentary work as being ruled by a kind of idealism. “Years ago, I actually thought of becoming a hospital clown myself,” she says. “I figured if documentaries didn’t pan out, I could be a clown. I was simply attracted to doing some good. I need to do some good.” Can documentary filmmaking cover that need? “Yes, though we are also these parasites on reality. But I am driven by a kind of idealism. I want to give something back to the world. That’s why it’s so important for me that the message always outshine the filmmaker’s ego. You shouldn’t use your protagonists as brushes for painting your message. You should be their mouthpiece” For further information on The Kid and the Clown, see reverse section. IDA GRØN Born 1979, Denmark. Holds a MA in documentary directing from the National Film and Television School, UK, 2009, and a BA in Art History, Copenhagen, 2006. Has worked with various formats in documentary – poetic, experimental, observational, investigative. The Kid and the Clown (2011) is Ida Grøn’s first documentary since her graduation.

FINAL CUT FOR REAL Founded 2009 by producer Signe Byrge Sørensen and Anne Köhncke, later joined by Monica Hellström. Among recent productions are Football is God by Ole Bendtzen, Returned by Marianne Hougen-Moraga, and The Kid and the Clown by Ida Grøn, selected for IDFA 2011. www.final-cut.dk 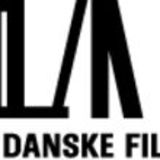