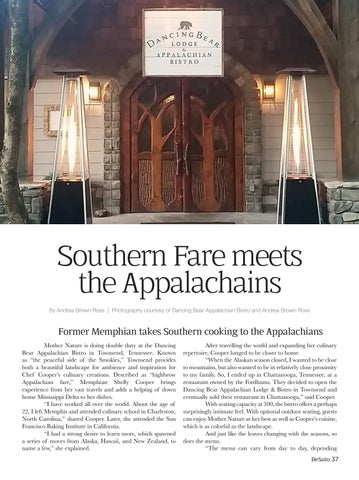 Mother Nature is doing double duty at the Dancing Bear Appalachian Bistro in Townsend, Tennessee. Known as “the peaceful side of the Smokies,” Townsend provides both a beautiful landscape for ambience and inspiration for Chef Cooper’s culinary creations. Described as “highbrow Appalachian fare,” Memphian Shelly Cooper brings experience from her vast travels and adds a helping of down home Mississippi Delta to her dishes. “I have worked all over the world. About the age of 22, I left Memphis and attended culinary school in Charleston, North Carolina,” shared Cooper. Later, she attended the San Francisco Baking Institute in California. “I had a strong desire to learn more, which spawned a series of moves from Alaska, Hawaii, and New Zealand, to name a few,” she explained.

After travelling the world and expanding her culinary repertoire, Cooper longed to be closer to home. “When the Alaskan season closed, I wanted to be close to mountains, but also wanted to be in relatively close proximity to my family. So, I ended up in Chattanooga, Tennessee, at a restaurant owned by the Fordhams. They decided to open the Dancing Bear Appalachian Lodge &amp; Bistro in Townsend and eventually sold their restaurant in Chattanooga,” said Cooper. With seating capacity at 300, the bistro offers a perhaps surprisingly intimate feel. With optional outdoor seating, guests can enjoy Mother Nature at her best as well as Cooper’s cuisine, which is as colorful as the landscape. And just like the leaves changing with the seasons, so does the menu. “The menu can vary from day to day, depending DeSoto 37

With cooler weather right around the corner DeSoto heads outdoors for all kinds of adventures. 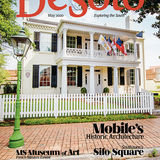