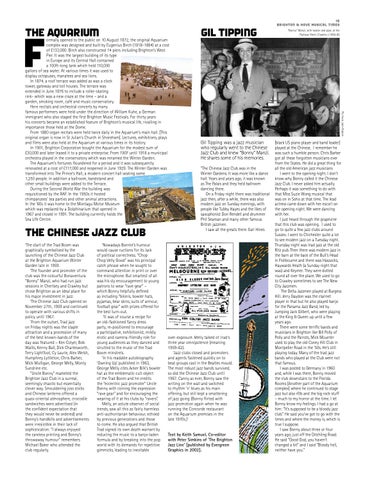 THE CHINESE JAZZ CLUB ‘The start of the Trad Boom was graphically symbolised by the launching of the Chinese Jazz Club at the Brighton Aquarium Winter Garden late in 1959. ‘The founder and promoter of the club was the colourful Bonaventura “Bonny” Manzi, who had run jazz sessions in Chertsey and Crawley but chose Brighton as an ideal place for his major investment in jazz. ‘The Chinese Jazz Club opened on November 27th, 1959 and continued to operate with various shifts in policy until 1967. ‘From the outset, Trad jazz on Friday nights was the staple attraction and a procession of many of the best known-bands of the day was featured – Ken Colyer, Bob Wallis, Kenny Ball, Dick Charlesworth, Terry Lightfoot, Cy Laurie, Alex Welsh, Humphrey Lyttleton, Chris Barber, Mick Mulligan, George Melly, Monty Sunshine etc. “Uncle Bonny” marketed the Brighton Jazz Club in a surreal, seemingly chaotic but essentially clever way. Smouldering joss sticks and Chinese lanterns offered a quasi-oriental atmosphere, crocodile sandwiches were advertised (in the confident expectation that they would never be ordered) and Bonny’s handbills and advertisements were irresistible in their lack of sophistication. “I always enjoyed the careless printing and Bonny’s throwaway humour” remembers Michael Baker who attended the club regularly.

‘Nowadays Bonnie’s humour would cause ructions for its lack of political correctness. “Chop Chop Velly Good” was his principal catch phrase when he sought to command attention in print or over the microphone. But smartest of all was his sly encouragement to young patrons to wear “rave gear” – which Bonny helpfully defined as including “bikinis, bowler hats, pyjamas, bear skins, suits of armour, football gear” with prizes offered for the best turn-out. ‘It was of course a recipe for an old-fashioned fancy dress party, re-positioned to encourage a participative, exhibitionist, mildly erotic and camera-friendly role for young audiences as they danced and strutted to the music of the Trad Boom minstrels. ‘In his readable autobiography ‘Owning Up’ published in 1963, George Melly cites Acker Bilk’s bowler hat as the emblematic cult object of the Trad Boom and he credits the “eccentric jazz promoter” Uncle Bonny with coining the expression “rave gear” and for encouraging the wearing of it at his clubs by “ravers”. Melly, an astute observer of social trends, saw all this as fairly harmless anti-authoritarian behaviour, echoed by previous generations and those to come. He also argued that British Trad signed its own death warrant by reducing the music to a banjo-laden formula and by breaking into the pop world with its demands for repetitive gimmicks, leading to inevitable

ormally opened to the public on 10 August 1872, the original Aquarium complex was designed and built by Eugenius Birch (1818-1884) at a cost of £133,000. Birch also constructed 14 piers including Brighton’s West Pier. It was the largest building of its type in Europe and its Central Hall contained a 100ft-long tank which held 110,000 gallons of sea water. At various times it was used to display octopuses, manatees and sea lions. In 1874, a roof terrace was added as was a clock tower, gateway and toll houses. The terrace was extended in June 1876 to include a roller-skating rink- which was a new craze at the time – and a garden, smoking room, café and music conservatory. Here recitals and orchestral concerts by many famous performers were held under the direction of William Kuhe, a German immigrant who also staged the first Brighton Music Festivals. For thirty years his concerts became an established feature of Brighton’s musical life, rivalling in importance those held at the Dome. From 1880 organ recitals were held twice daily in the Aquarium’s main hall. [This original organ is now in St Julian’s Church in Shoreham]. Lectures, exhibitions, plays and films were also held at the Aquarium at various times in its history. In 1901, Brighton Corporation bought the Aquarium for the modest sum of £30,000 and later leased it to a private enterprise. From 1907 until 1918 a municipal orchestra played in the conservatory which was renamed the Winter Garden. The Aquarium’s fortunes floundered for a period and it was subsequently renovated at a cost of £117,000 and reopened in June 1929. The Winter Garden was transformed into The Prince’s Hall, a modern concert hall seating some 1,250 people. In addition a ballroom, bandstand and other small buildings were added to the Terrace. During the Second World War the building was requisitioned by the RAF. In the 1950s it hosted chimpanzees’ tea parties and other animal attractions. In the ‘60s it was home to the Montagu Motor Museum which was replaced by a Dolphinarium that opened in 1967 and closed in 1991. The building currently holds the Sea Life Centre.

Gil Tipping was a jazz musician who regularly went to the Chinese Jazz Club and knew “Bonny” Manzi. He shares some of his memories. “The Chinese Jazz Club was in the Winter Gardens. It was more like a dance hall. Years and years ago, it was known as The Palais and they held ballroom dancing there. On a Friday night there was traditional jazz then, after a while, there was also modern jazz on Sunday evenings, with people like Tubby Hayes and the likes of saxophonist Don Rendell and drummer Phil Seaman and many other famous British jazzmen. I saw all the greats there. Earl Hines

over-exposure. Melly talked of Trad’s three year omnipotence (meaning 1959-62). ‘Jazz clubs closed and promoters and agents fastened quickly on to beat groups cast in the Beatles mould. The most robust jazz bands survived, so did the Chinese Jazz Club until 1967. Canny as ever, Bonny saw the writing on the wall and switched to rhythm ‘n’ blues as his main offering, but still kept a smattering of jazz going (Bonny flirted with jazz promotion again when he was running the Concorde restaurant on the Aquarium premises in the late 1970s.)’ Text by Keith Samuel, Co-editor with Peter Simkins of ‘The Brighton Jazz Line’ [published by Evergreen Graphics in 2002].

[black US piano player and band leader] played at the Chinese. I remember he was such a humble person. Chris Barber got all these forgotten musicians over from the States. He did a great thing for all the old American jazz musicians I went to the opening night. I don’t know why Bonny called it the Chinese Jazz Club. I never asked him actually. Perhaps it was something to do with that Miss Suzie Wong musical that was on in Soho at that time. The lead actress came down with her escort on the opening night. We were dancing with her. I just heard through the grapevine that this club was opening. I used to go to quite a few jazz clubs around Sussex. I went to Chichester quite a lot to see modern jazz on a Tuesday night. Thursday night was trad jazz at the old Ritz pub. Then there was modern jazz in the barn at the back of the Bull’s Head in Fishbourne and there was Hassocks, Haywards Heath (a Sunday night that was) and Keymer. They were dotted round all over the place. We used to go to Crawley sometimes to see The New City Jazzmen. The Delta Jazzmen played at Burgess Hill. Jerry Gaydon was the clarinet player in that but he also played banjo for the Panama Jazz Band, led by Jumping Jack Gilbert, who were playing at the King &amp; Queen up until a few years ago. There were some terrific bands and musicians in Brighton like Bill Polly of Polly and the Parrots, Mick Mounter used to play the old Coney Hill Club in Montpelier Road in the ‘50s. He’s still playing today. Many of the trad jazz bands who played at the Club were not that famous. I was posted to Germany in 1960 and, while I was there, Bonny moved the club downstairs to the Florida Rooms [Another part of the Aquarium complex] where he continued to stage jazz but also r&amp;b and the big rock stuff – much to my horror at the time. I let Bonny know my feelings. I had a go at him: “It’s supposed to be a bloody jazz club.” He said you’ve got to go with the times and where the money is, which is true I suppose. I saw Bonny about three or four years ago, just off the Ditchling Road. He said “Good God, you haven’t changed a bit” and I said “Bloody hell, neither have you.” 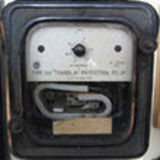