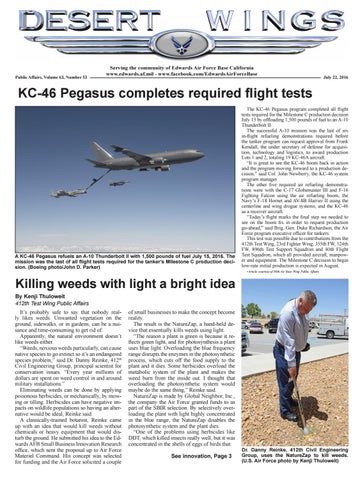 A KC-46 Pegasus refuels an A-10 Thunderbolt II with 1,500 pounds of fuel July 15, 2016. The mission was the last of all flight tests required for the tanker’s Milestone C production decision. (Boeing photo/John D. Parker)

The KC-46 Pegasus program completed all flight tests required for the Milestone C production decision July 15 by offloading 1,500 pounds of fuel to an A-10 Thunderbolt II. The successful A-10 mission was the last of six in-flight refueling demonstrations required before the tanker program can request approval from Frank Kendall, the under secretary of defense for acquisition, technology and logistics, to award production Lots 1 and 2, totaling 19 KC-46A aircraft. “It is great to see the KC-46 boom back in action and the program moving forward to a production decision,” said Col. John Newberry, the KC-46 system program manager. The other five required air refueling demonstrations were with the C-17 Globemaster III and F-16 Fighting Falcon using the air refueling boom, the Navy’s F-18 Hornet and AV-8B Harrier II using the centerline and wing drogue systems, and the KC-46 as a receiver aircraft. “Today’s flight marks the final step we needed to see on the boom fix in order to request production go-ahead,” said Brig. Gen. Duke Richardson, the Air Force program executive officer for tankers. This test was possible due to contributions from the 412th Test Wing, 23rd Fighter Wing, 355th FW, 124th FW, 896th Test Support Squadron and 40th Flight Test Squadron, which all provided aircraft, manpower and equipment. The Milestone C decision to begin low-rate initial production is expected in August. -Article courtesy of 88th Air Base Wing Public Affairs

It’s probably safe to say that nobody really likes weeds. Unwanted vegetation on the ground, sidewalks, or in gardens, can be a nuisance and time-consuming to get rid of. Apparently, the natural environment doesn’t like weeds either. “Weeds, noxious weeds particularly, can cause native species to go extinct so it’s an endangered species problem,” said Dr. Danny Reinke, 412th Civil Engineering Group, principal scientist for conservation issues. “Every year millions of dollars are spent on weed control in and around military installations.” Eliminating weeds can be done by applying poisonous herbicides, or mechanically, by mowing or tilling. Herbicides can have negative impacts on wildlife populations so having an alternative would be ideal, Reinke said. A classically-trained botanist, Reinke came up with an idea that would kill weeds without chemicals or heavy equipment that would disturb the ground. He submitted his idea to the Edwards AFB Small Business Innovation Research office, which sent the proposal up to Air Force Materiel Command. His concept was selected for funding and the Air Force solicited a couple

of small businesses to make the concept become reality. The result is the NatureZap, a hand-held device that essentially kills weeds using light. “The reason a plant is green is because it reflects green light, and for photosynthesis a plant uses blue light. Overloading the blue frequency range disrupts the enzymes in the photosynthetic process, which cuts off the food supply to the plant and it dies. Some herbicides overload the metabolic system of the plant and makes the weed burn from the inside out. I thought that overloading the photosynthetic system would maybe do the same thing,” Reinke said. NatureZap is made by Global Neighbor, Inc., the company the Air Force granted funds to as part of the SBIR selection. By selectively overloading the plant with light highly concentrated in the blue range, the NatureZap disables the photosynthetic system and the plant dies. “One of the problems using herbicides like DDT, which killed insects really well, but it was concentrated in the shells of eggs of birds that See innovation, Page 3 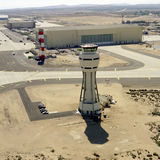