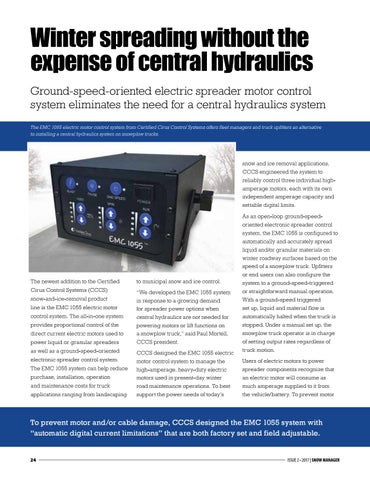 snow and ice removal applications, CCCS engineered the system to reliably control three individual highamperage motors, each with its own independent amperage capacity and settable digital limits. As an open-loop ground-speedoriented electronic spreader control system, the EMC 1055 is configured to automatically and accurately spread liquid and/or granular materials on winter roadway surfaces based on the speed of a snowplow truck. Upfitters or end users can also configure the The newest addition to the Certified

to municipal snow and ice control.

“We developed the EMC 1055 system in response to a growing demand for spreader power options when central hydraulics are not needed for powering motors or lift functions on a snowplow truck,” said Paul Mortell, CCCS president.

With a ground-speed triggered set up, liquid and material flow is automatically halted when the truck is stopped. Under a manual set up, the snowplow truck operator is in charge of setting output rates regardless of truck motion. Users of electric motors to power spreader components recognize that an electric motor will consume as much amperage supplied to it from the vehicle/battery. To prevent motor

To prevent motor and/or cable damage, CCCS designed the EMC 1055 system with “automatic digital current limitations” that are both factory set and field adjustable. 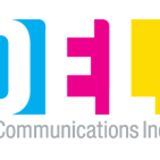