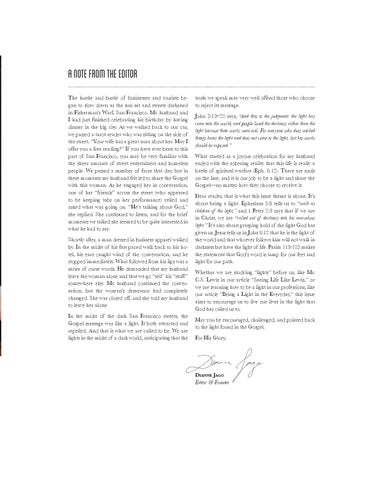 A Note From the editor The hustle and bustle of businesses and tourists began to slow down as the sun set and streets darkened in Fisherman’s Warf, San Francisco. My husband and I had just finished celebrating his birthday by having dinner in the big city. As we walked back to our car, we passed a tarot reader who was sitting on the side of the street. “Your wife has a great aura about her. May I offer you a free reading?” If you have ever been to this part of San Francisco, you may be very familiar with the sheer amount of street entertainers and homeless people. We passed a number of faces that day, but in these moments my husband felt led to share the Gospel with this woman. As he engaged her in conversation, one of her “friends” across the street (who appeared to be keeping tabs on her performance) yelled and asked what was going on. “He’s talking about God,” she replied. She continued to listen, and for the brief moments we talked she seemed to be quite interested in what he had to say. Shortly after, a man dressed in business apparel walked by. In the midst of his fast paced walk back to his hotel, his ears caught wind of the conversation, and he stopped immediately. What followed from his lips was a series of curse words. He demanded that my husband leave the woman alone and that we go “sell” his “stuff ” somewhere else. My husband continued the conversation, but the woman’s demeanor had completely changed. She was closed off, and she told my husband to leave her alone. In the midst of the dark San Francisco streets, the Gospel message was like a light. It both attracted and repelled. And that is what we are called to be. We are lights in the midst of a dark world, anticipating that the

truth we speak may very well offend those who choose to reject its message. John 3:19–20 says, “And this is the judgment: the light has come into the world, and people loved the darkness rather than the light because their works were evil. For everyone who does wicked things hates the light and does not come to the light, lest his works should be exposed.” What started as a joyous celebration for my husband ended with the sobering reality that this life is really a battle of spiritual warfare (Eph. 6:12). There are souls on the line, and it is our job to be a light and share the Gospel—no matter how they choose to receive it. Dear reader, that is what this issue theme is about. It’s about being a light. Ephesians 5:8 tells us to “walk as children of the light,” and 1 Peter 2:9 says that if we are in Christ, we are “called out of darkness into his marvelous light.” It’s also about grasping hold of the light God has given us. Jesus tells us in John 8:12 that he is the light of the world and that whoever follows him will not walk in darkness but have the light of life. Psalm 119:105 makes the statement that God’s word is lamp for our feet and light for our path. Whether we are studying “lights” before us, like Mr. C.S. Lewis in our article “Seeing Life Like Lewis,” or we are learning how to be a light in our professions, like our article “Being a Light in the Everyday,” this issue aims to encourage us to live our lives in the light that God has called us to. May you be encouraged, challenged, and pointed back to the light found in the Gospel. For His Glory, 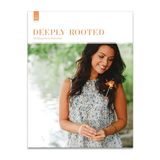