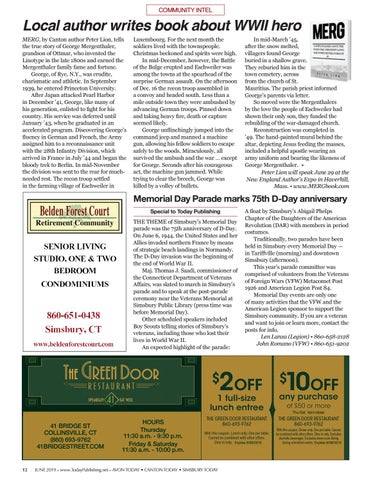 Local author writes book about WWII hero MERG, by Canton author Peter Lion, tells the true story of George Mergenthaler, grandson of Ottmar, who invented the Linotype in the late 1800s and earned the Mergenthaler family fame and fortune. George, of Rye, N.Y., was erudite, charismatic and athletic. In September 1939, he entered Princeton University. After Japan attacked Pearl Harbor in December ’41, George, like many of his generation, enlisted to fight for his country. His service was deferred until January ’43, when he graduated in an accelerated program. Discovering George’s fluency in German and French, the Army assigned him to a reconnaissance unit with the 28th Infantry Division, which arrived in France in July ’44 and began the bloody trek to Berlin. In mid-November the division was sent to the rear for muchneeded rest. The recon troop settled in the farming village of Eschweiler in

Luxembourg. For the next month the soldiers lived with the townspeople. Christmas beckoned and spirits were high. In mid-December, however, the Battle of the Bulge erupted and Eschweiler was among the towns at the spearhead of the surprise German assault. On the afternoon of Dec. 16 the recon troop assembled in a convoy and headed south. Less than a mile outside town they were ambushed by advancing German troops. Pinned down and taking heavy fire, death or capture seemed likely. George unflinchingly jumped into the command jeep and manned a machine gun, allowing his fellow soldiers to escape safely to the woods. Miraculously, all survived the ambush and the war … except for George. Seconds after his courageous act, the machine gun jammed. While trying to clear the breech, George was killed by a volley of bullets.

In mid-March ’45, after the snow melted, villagers found George buried in a shallow grave. They reburied him in the town cemetery, across from the church of St. Mauritius. The parish priest informed George’s parents via letter. So moved were the Mergenthalers by the love the people of Eschweiler had shown their only son, they funded the rebuilding of the war-damaged church. Reconstruction was completed in ’49. The hand-painted mural behind the altar, depicting Jesus feeding the masses, included a helpful apostle wearing an army uniform and bearing the likeness of George Mergenthaler. + Peter Lion will speak June 29 at the New England Author’s Expo in Haverhill, Mass. • www.MERGbook.com

THE THEME of Simsbury’s Memorial Day parade was the 75th anniversary of D-Day. On June 6, 1944, the United States and her Allies invaded northern France by means of strategic beach landings in Normandy. The D-Day invasion was the beginning of the end of World War II. Maj. Thomas J. Saadi, commissioner of the Connecticut Department of Veterans Affairs, was slated to march in Simsbury’s parade and to speak at the post-parade ceremony near the Veterans Memorial at Simsbury Public Library (press time was before Memorial Day). Other scheduled speakers included Boy Scouts telling stories of Simsbury’s veterans, including those who lost their lives in World War II. An expected highlight of the parade:

A float by Simsbury’s Abigail Phelps Chapter of the Daughters of the American Revolution (DAR) with members in period costumes. Traditionally, two parades have been held in Simsbury every Memorial Day — in Tariffville (morning) and downtown Simsbury (afternoon). This year’s parade committee was comprised of volunteers from the Veterans of Foreign Wars (VFW) Metacomet Post 1926 and American Legion Post 84. Memorial Day events are only one of many activities that the VFW and the American Legion sponsor to support the Simsbury community. If you are a veteran and want to join or learn more, contact the posts for info. Len Lanza (Legion) • 860-658-2128 John Romano (VFW) • 860-651-9202