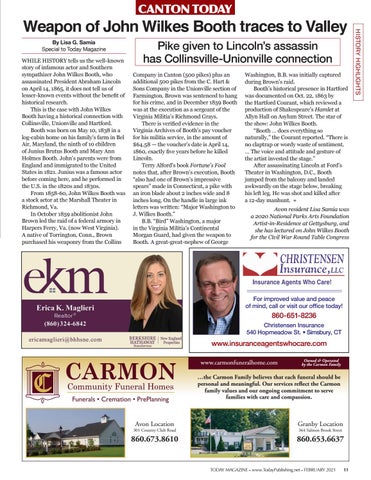 Pike given to Lincoln’s assassin has Collinsville-Unionville connection

WHILE HISTORY tells us the well-known story of infamous actor and Southern sympathizer John Wilkes Booth, who Company in Canton (500 pikes) plus an Washington, B.B. was initially captured assassinated President Abraham Lincoln additional 500 pikes from the C. Hart & during Brown’s raid. on April 14, 1865, it does not tell us of Sons Company in the Unionville section of Booth’s historical presence in Hartford lesser-known events without the benefit of Farmington. Brown was sentenced to hang was documented on Oct. 22, 1863 by historical research. for his crime, and in December 1859 Booth the Hartford Courant, which reviewed a This is the case with John Wilkes was at the execution as a sergeant of the production of Shakespeare’s Hamlet at Booth having a historical connection with Virginia Militia’s Richmond Grays. Allyn Hall on Asylum Street. The star of Collinsville, Unionville and Hartford. There is verified evidence in the the show: John Wilkes Booth. Booth was born on May 10, 1838 in a Virginia Archives of Booth’s pay voucher “Booth … does everything so log-cabin home on his family’s farm in Bel for his militia service, in the amount of naturally,” the Courant reported. “There is Air, Maryland, the ninth of 10 children $64.58 — the voucher’s date is April 14, no claptrap or wordy waste of sentiment. responsible for grammatical errors) 1860, exactly five years before he killed of Junius Brutus Booth and Mary Ann … The voice and attitude and gesture of Holmes Booth. John’s parents were from Lincoln. the artist invested the stage.” England and immigrated to the United Terry Alford’s book Fortune’s Fool After assassinating Lincoln at Ford’s States in 1821. Junius was a famous actor notes that, after Brown’s execution, Booth Theater in Washington, D.C., Booth 374 Hopmeadow Street • Simsbury, CT 06089 before coming here, and he performed in “also had one of Brown’s impressive jumped from the balcony and landed 860-651-8236 the U.S. in the 1820s and 1830s. spears” made in Connecticut, a pike with awkwardly on the stage below, breaking www.Insuranceagentswhocare.com From 1858-60, John Wilkes Booth was an iron blade about 2 inches wide and 8 his out lefthow leg.you Hecan wasget shot and killed after Find improved value and peace of Callmanhunt. or visit our office a stock actor at the Marshall Theater in inches long. On the handle in large ink a mind. 12-day + today! Richmond, Va. letters was written: “Major Washington to Avon resident Lisa Samia was In October 1859 abolitionist John J. Wilkes Booth.” a 2020 National Parks Arts Foundation Brown led the raid of a federal armory in B.B. “Bird” Washington,Preview a major Only Artist-in-Residence at Gettysburg, and Harpers Ferry, Va. (now West Virginia). in the Virginia Militia’s Continental has lectured on John Wilkes Booth (Layout includes a margin clear of text andshe graphics A native of Torrington, Conn., Brown Morgan Guard, had given the weapon to for the Civilinstallation) War Round Table Congress as this information may be covered by frame and/or clips during purchased his weaponry from the Collins Booth. A great-great-nephew of George

Dapproval PROOF or changes to:

For improved value and peace of mind, call or visit our office today!

re not responsible for grammatical errors)

www.Insuranceagentswhocare.com Find out how you can get improved value and peace of mind. Call or visit our office today!

…the Carmon Family believes that each funeral should be personal and meaningful. Our services reflect the Carmon family values and our ongoing commitment to serve families with care and compassion.

OVED our approval or changes to: lison@Terraboost.com date

Owned & Operated by the Carmon Family