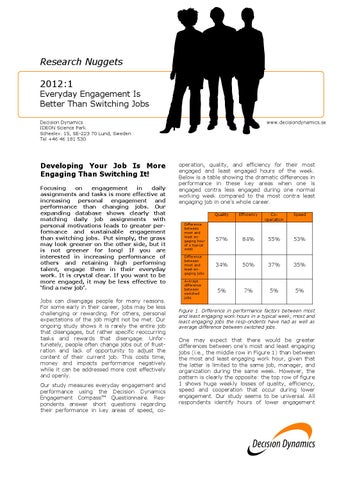 Developing Your Job Is More Engaging Than Switching It! Focusing on engagement in daily assignments and tasks is more effective at increasing personal engagement and performance than changing jobs. Our expanding database shows clearly that matching daily job assignments with personal motivations leads to greater performance and sustainable engagement than switching jobs. Put simply, the grass may look greener on the other side, but it is not greener for long! If you are interested in increasing performance of others and retaining high performing talent, engage them in their everyday work. It is crystal clear. If you want to be more engaged, it may be less effective to ‘find a new job’. Jobs can disengage people for many reasons. For some early in their career, jobs may be less challenging or rewarding. For others, personal expectations of the job might not be met. Our ongoing study shows it is rarely the entire job that disengages, but rather specific reoccurring tasks and rewards that disengage. Unfortunately, people often change jobs out of frustration and lack of opportunity to adjust the content of their current job. This costs time, money and impacts performance negatively while it can be addressed more cost effectively and openly. Our study measures everyday engagement and performance using the Decision Dynamics Engagement Compass™ Questionnaire. Respondents answer short questions regarding their performance in key areas of speed, co-

operation, quality, and efficiency for their most engaged and least engaged hours of the week. Below is a table showing the dramatic differences in performance in these key areas when one is engaged contra less engaged during one normal working week compared to the most contra least engaging job in one’s whole career.

One may expect that there would be greater differences between one’s most and least engaging jobs (i.e., the middle row in Figure 1) than between the most and least engaging work hour, given that the latter is limited to the same job, manager, and organization during the same week. However, the pattern is clearly the opposite: the top row of figure 1 shows huge weekly losses of quality, efficiency, speed and cooperation that occur during lower engagement. Our study seems to be universal. All respondents identify hours of lower engagement

and in all of these hours, performance suffers.1 This is important. With every job comes low engagement tasks. However, switching jobs simply switches the problem of wasted everyday engagement. It does not eliminate it. Only addressing the match of tasks and job content with motivations solves the engagement puzzle. Changing jobs might just make it worse. Below, figure 2 shows how we may be blinded by leaving the bad parts of the present job to get new benefits of switching to a new job. This ignores that the new job also have bad parts that disengage and wanted parts that are missing. Instead, developing the present job can not only increase its actual benefits by adding missing parts, but also reduce the disengaging parts. Develop present job + More actual benefits + Less disengaging parts Present job

Figure 2. A visualization of the advantage in developing your present job rather than switching to something new.

To put it simply, changing a job might be overvalued in terms of raising individual engagement. Even when a new job brings new experiences and other kinds of rewards, it is clear that a sustainable and effective way to address engagement is replacing some of the least engaging hours of the week with more of the most engaging hours. The immediate result will be greater performance, development and retention of talent. Here is what you can do: 1. Be aware of the constant danger of disengagement Even seemingly attractive positions will likely feature areas and moments of disengagement. 2. Allow yourself and others to be straight-forward Because engagement is such a personal experience, true change can only come from an environment which allows being straight-forward. 3. Implement everyday change, even if only small-scale Even changing one of your least engaging work hours to one or more of your most engaging hours will prove greatly beneficial for both you and your organization.