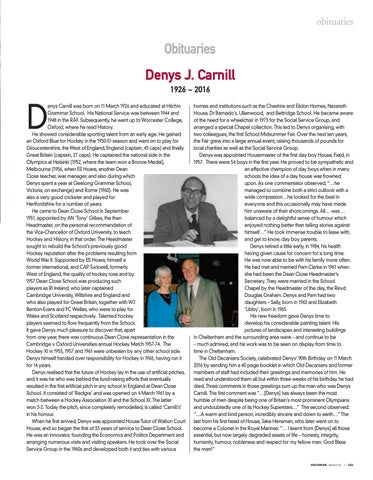 enys Carnill was born on 11 March 1926 and educated at Hitchin Grammar School. His National Service was between 1944 and 1948 in the RAF. Subsequently, he went up to Worcester College, Oxford, where he read History. He showed considerable sporting talent from an early age. He gained an Oxford Blue for Hockey in the 1950-51 season and went on to play for Gloucestershire, the West of England, England (captain, 45 caps) and finally Great Britain (captain, 27 caps). He captained the national side in the Olympics at Helsinki (1952, where the team won a Bronze Medal), Melbourne (1956, when ES Hoare, another Dean Close teacher, was manager, and also during which Denys spent a year at Geelong Grammar School, Victoria, on exchange) and Rome (1960). He was also a very good cricketer and played for Hertfordshire for a number of years. He came to Dean Close School in September 1951, appointed by AN ’Tony’ Gilkes, the then Headmaster, on the personal recommendation of the Vice-Chancellor of Oxford University, to teach Hockey and History, in that order. The Headmaster sought to rebuild the School’s previously good Hockey reputation after the problems resulting from World War II. Supported by ES Hoare, himself a former international, and CAP Tuckwell, formerly West of England, the quality of hockey rose and by 1957 Dean Close School was producing such players as RI Ireland, who later captained Cambridge University, Wiltshire and England and who also played for Great Britain, together with WJ Benton-Evans and FC Welles, who were to play for Wales and Scotland respectively. Talented hockey players seemed to flow frequently from the School. It gave Denys much pleasure to discover that, apart from one year, there was continuous Dean Close representation in the Cambridge v Oxford Universities annual Hockey Match 1957-74. The Hockey XI in 1955, 1957 and 1961 were unbeaten by any other school side. Denys himself handed over responsibility for Hockey in 1965, having run it for 14 years. Denys realised that the future of Hockey lay in the use of artificial pitches, and it was he who was behind the fund-raising efforts that eventually resulted in the first artificial pitch in any school in England at Dean Close School. It consisted of ‘Redgra’ and was opened on 4 March 1961 by a match between a Hockey Association XI and the School XI. The latter won 3-2. Today the pitch, since completely remodelled, is called ‘Carnill’s’ in his honour. When he first arrived, Denys was appointed House Tutor of Walton Court House, and so began the first of 33 years of service to Dean Close School. He was an innovator, founding the Economics and Politics Department and arranging numerous visits and visiting speakers. He took over the Social Service Group in the 1960s and developed both it and ties with various

homes and institutions such as the Cheshire and Eildon Homes, Nazareth House, Dr Barnado’s, Ullenwood, and Bettridge School. He became aware of the need for a wheelchair in 1973 for the Social Service Group, and arranged a special Chapel collection. This led to Denys organising, with two colleagues, the first School Midsummer Fair. Over the next ten years, the Fair grew into a large annual event, raising thousands of pounds for local charities as well as the Social Service Group. Denys was appointed Housemaster of the first day boy House, Field, in 1957. There were 54 boys in the first year. He proved to be sympathetic and an effective champion of day boys when in many schools the idea of a day house was frowned upon. As one commentator observed, “…he managed to combine both a strict outlook with a wide compassion…he looked for the best in everyone and this occasionally may have made him unaware of their shortcomings. All… was … balanced by a delightful sense of humour which enjoyed nothing better than telling stories against himself…’’ He took immense trouble to liaise with, and get to know, day boy parents. Denys retired a little early, in 1984, his health having given cause for concern for a long time. He was now able to be with his family more often. He had met and married Pam Clarke in 1961 when she had been the Dean Close Headmaster’s Secretary. They were married in the School Chapel by the Headmaster of the day, the Revd Douglas Graham. Denys and Pam had two daughters – Sally, born in 1963 and Elizabeth ‘Libby’, born in 1965. His new freedom gave Denys time to develop his considerable painting talent. His pictures of landscapes and interesting buildings in Cheltenham and the surrounding area were – and continue to be – much admired, and his work was to be seen on display from time to time in Cheltenham. The Old Decanians Society, celebrated Denys’ 90th Birthday on 11 March 2016 by sending him a 40 page booklet in which Old Decanians and former members of staff had included their greetings and memories of him. He read and understood them all but within three weeks of his birthday he had died. Three comments in those greetings sum up the man who was Denys Carnill. The first comment was “…[Denys] has always been the most humble of men despite being one of Britain’s most prominent Olympians and undoubtedly one of its Hockey Superstars…” The second observed: ”…A warm and kind person, incredibly sincere and down to earth…” The last from his first head of House, Jake Hensman, who later went on to become a Colonel in the Royal Marines: “… I learnt from [Denys] all those essential, but now largely degraded assets of life – honesty, integrity, humanity, humour, nobleness and respect for my fellow man. God Bless the man!” DECANIAN 2015/16 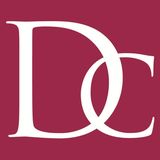