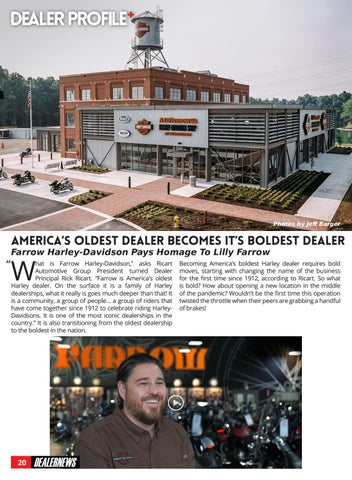 hat is Farrow Harley-Davidson,” asks Ricart Automotive Group President turned Dealer Principal Rick Ricart. “Farrow is America’s oldest Harley dealer. On the surface it is a family of Harley dealerships, what it really is goes much deeper than that! It is a community, a group of people… a group of riders that have come together since 1912 to celebrate riding HarleyDavidsons. It is one of the most iconic dealerships in the country.” It is also transitioning from the oldest dealership to the boldest in the nation.

Becoming America’s boldest Harley dealer requires bold moves, starting with changing the name of the business for the first time since 1912, according to Ricart. So what is bold? How about opening a new location in the middle of the pandemic? Wouldn’t be the first time this operation twisted the throttle when their peers are grabbing a handful of brakes!