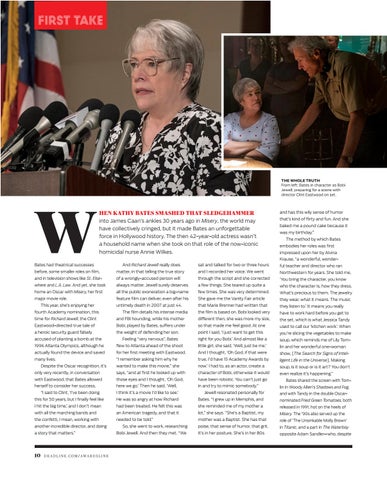 THE WHOLE TRUTH From left: Bates in character as Bobi Jewell; preparing for a scene with director Clint Eastwood on set.

HEN KATHY BATES SMASHED THAT SLEDGEHAMMER into James Caan’s ankles 30 years ago in Misery, the world may have collectively cringed, but it made Bates an unforgettable force in Hollywood history. The then 42-year-old actress wasn’t a household name when she took on that role of the now-iconic homicidal nurse Annie Wilkes.

and has this wily sense of humor that’s kind of flirty and fun. And she baked me a pound cake because it was my birthday.” The method by which Bates embodies her roles was first impressed upon her by Alvina Krause, “a wonderful, wonder-

And Richard Jewell really does

sat and talked for two or three hours

ful teacher and director who ran

before, some smaller roles on film,

matter, in that telling the true story

and I recorded her voice. We went

Northwestern for years. She told me,

of a wrongly-accused person will

through the script and she corrected

‘You bring the character, you know

where and L.A. Law. And yet, she took

a few things. She teared up quite a

who the character is, how they dress.

home an Oscar with Misery, her first

all the public exoneration a big-name

few times. She was very determined.

What’s precious to them. The jewelry

feature film can deliver, even after his

She gave me the Vanity Fair article

they wear, what it means. The music

that Marie Brenner had written that

they listen to.’ It means you really

the film is based on. Bobi looked very

have to work hard before you get to

This year, she’s enjoying her fourth Academy nomination, this

The film details his intense media

time for Richard Jewell, the Clint

and FBI hounding, while his mother

different then, she was more my size,

the set, which is what Jessica Tandy

Bobi, played by Bates, suffers under

so that made me feel good. At one

used to call our ‘kitchen work’. When

the weight of defending her son.

point I said, ‘I just want to get this

you’re slicing the vegetables to make

accused of planting a bomb at the

soup, which reminds me of Lily Tom-

1996 Atlanta Olympics, although he

flew to Atlanta ahead of the shoot

lin and her wonderful one-woman

actually found the device and saved

for her first meeting with Eastwood.

And I thought, ‘Oh God, if that were

show, [The Search for Signs of Intel-

“I remember asking him why he

true, I’d have 15 Academy Awards by

ligent Life in the Universe]. Making

wanted to make this movie,” she

soup, is it soup or is it art? You don’t

only very recently, in conversation

says, “and at first he looked up with

character of Bobi, otherwise it would

with Eastwood, that Bates allowed

those eyes and I thought, ‘Oh God,

have been robotic. You can’t just go

herself to consider her success.

in and try to mimic somebody.”

Despite the Oscar recognition, it’s

Bates shared the screen with Tomlin in Woody Allen’s Shadows and Fog,

“I said to Clint, ‘I’ve been doing

He was so angry at how Richard

Bates. “I grew up in Memphis, and

I hit the big time,’ and I don’t mean

had been treated. He felt this was

she reminded me of my mother a

with all the marching bands and

an American tragedy, and that it

Misery. The ’90s also served up the

the confetti, I mean, working with

needed to be told.”

mother was a Baptist. She has that

role of ‘The Unsinkable Molly Brown’

poise, that sense of humor, that grit.

in Titanic, and a part in The Waterboy

another incredible director, and doing a story that matters.”

So, she went to work, researching Bobi Jewell. And then they met. “We

and with Tandy in the double Oscar- 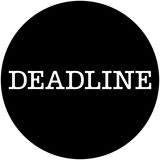