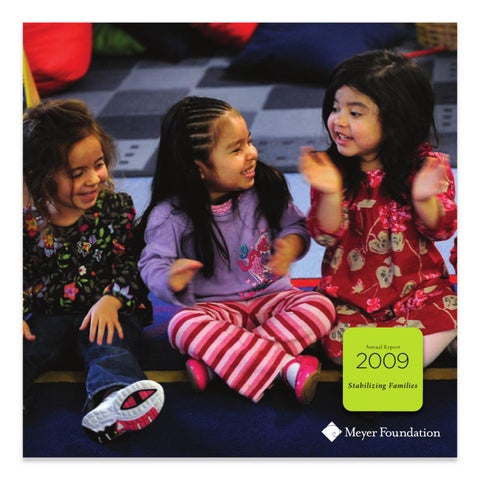 ABOUT THE MEYER FOUNDATION The Meyer Foundation is a private, independent foundation that supports organizations working to meet local community needs throughout the Washington, DC metropolitan region. The Foundation identifies and invests in visionary nonprofit leaders working to improve the lives of low-income people, provide hope and opportunity for young people, build community through the arts, and strengthen the regionâ&amp;#x20AC;&amp;#x2122;s nonprofit sector.

2009 WAS TOUGH ON FAMILIES IN OUR REGION. ­ ut­none­suﬀered­more­than­those­who­have­always­had­a­diﬃcult­time:­lowB income­families.­Many­parents­in­the­service­industry­faced­job­losses;­restaurant business­in­the­DC­region,­for­example,­was­down­as­much­as­40­percent.­ Economists estimate that child poverty costs the US

a year in lost productivity in the labor force

and spending on health care and the criminal justice system.*

*National Center for Children in Poverty

Whole families of children have grown up at CentroNĂ­a, which celebrates its 25th anniversary this year. Many children that started with them are now first-generation college students. (Pictured above: President and CEO BB Otero, far left, talks with one of CentroNĂ­aâ&amp;#x20AC;&amp;#x2122;s families.)

For more than 65 years, the Meyer Foundation has been responsive to the needs of its grantees, and 2009 was no exception. We continued our practice of deep listening and remaining flexible to grantee needs. And we provided grantees with an array of services and tools—from our core grantmaking to our capacity-building and cash-flow loans— to stabilize them so they could focus on their mission-critical work. (Learn more about the breadth of the Meyer Foundation’s services for grantees on pages 22-24.) IN 2009, THE MEYER FOUNDATION AWARDED $6.7 MILLION IN GRANTS TO MORE THAN 200 NONPROFITS.­WE COMMUNICATED the­impact­of­the­economy­on­our­grantmaking­in­open­letters­to

the­community­and­in­site­visits.­WE RESPONDED TO THE IMMEDIATE NEEDS OF OUR GRANTEES, adjusting­our­policies­and­streamlining­our­processes­throughout­the­year,­including­expediting­grants­for organizations­facing­financial­crisis. WE PROVIDED OUR NEW CONFERENCE SPACE FOR BOARD MEETINGS, STAFF RETREATS, 5

AND CONVENINGS AT NO COST to­grantee­partners­and­peer­institutions. WE FUNDED AND RELEASED TWO REPORTS IN HOT TOPIC AREAS OF INTEREST TO THE FIELD:­outsourcing­back­oﬃce­operations­(with­the­Management­Assistance­Group)­and­operating­reserves­(with

CentroNía is a diverse community. Of the children served, approximately • 60% are Latino • 35% are African American • 5% other • 86% are low-income

The Meyer Foundation has invested nearly $500,000 in CentroNía since 1992, including grants for general operating support, facilities, program expansion, and management assistance. CentroNía has also received a Meyer cash flow loan to help fund operations while awaiting the receipt of other committed funds.

CENTRONÍA It was 1986 when CentroNía began providing child care to 15 young children in a church in DC. There was a huge influx of Central Americans into the Columbia Heights neighborhood at the time. “I saw an opportunity for moms to come together for their children,” says Beatriz “BB” Otero, President and CEO of CentroNía. That was the beginning of what Otero calls “a community development organization with strong social justice underpinnings.”

children were on DC child care providers’ waiting lists, most of them children under age three.*

Since then, the organization has broadened and deepened the services it oﬀers to include before- and afterschool programs for children ages 5 to 12, youth development programs for teens, counseling and other family support services, training and professional development for child care providers, and a charter school. Its 250 employees serve 1,500 children and families in all eight wards of the District of Columbia and now in Maryland. CentroNía stays open 11 hours a day so parents can continue their education to get higher-wage jobs to support their families. * 2008 District of Columbia Child Care Market Rates and Capacity Utilization

Last year, CentroNía expanded to Langley Park in Montgomery County, Maryland, which is home to thousands of low-income Latino families. The Meyer Foundation helped fund this expansion. CentroNía now provides early childhood education to 65 two-, three- and four-year-old children, afterschool programs for youth, and links for parents to a range of services and programs. Otero has witnessed three economic downturns that have affected families, the worst being the aftershock of 9/11. “We make sure we stay strong and focused on the work, because this is where families go to get their support,” she says. Yet CentroNía has always remained flexible, “holding on to the core, yet nimble enough to shift to needs of the moment.” Students often come back to visit their preschool teachers. Ricky Green (pictured below) is a favorite. Neighborhoods that have been gentrified often lose their familiar places. “We want to be that place for children,” BB Otero says.

She also keeps childcare affordable, because it is one of the most critical links in the chain that allows parents to be able to work. In this kind of environment, with this kind of philosophy, families thrive.

CATALINA is a married mother of three children and a

but Catalina knows she is working towards a career path that

kitchen assistant at CentroNía, where she is currently working

will improve life for her family.

on attaining a professional early childhood credential. Her children are all part of the CentroNía family; all of them

“In 2005, there was a situation with my daughter’s day care.

attended CentroNía’s programs and her older son comes back

for afterschool tutoring. To earn her early childhood

leave my job. Fortunately, that same year, I got a job offer

credential she is required to spend a certain number of hours

volunteering in a classroom. This makes for a very long day,

located in Northern Virginia, understands the plight of the working poor, and how difficult it can be for parents with limited Shannon Steene, Executive Director Good Shepherd Housing and Family Services

income to make ends meet. The families that come to Good Shepherd often have jobs, but they may have been evicted or had their utilities shut off. They donâ&amp;#x20AC;&amp;#x2122;t have enough money for a deposit for a new rental and are desperate for infusions of cash to get by.

guidelines, the poverty level is

for a family of four.*

On the following pages you’ll meet Washielar and her family, and will learn how an introduction to Geoﬀrey Tate, Good Shepherd’s budget and credit counselor, is changing her life.

Good Shepherd Housing and Family Services serves the Route 1 Corridor of Fairfax County, Virginia. Although Fairfax County has a relatively low poverty rate and the second highest median household income in the United States, some neighborhoods around Route 1 in southern Fairfax County have experienced economic distress and have a much higher poverty rate than the rest of the county.

WASHIELAR SMILES EASILY NOW, but that hasn’t always been the case. A single mom with three children ages 5, 10, and 11, the dental assistant’s world turned upside down in 2007 when her youngest child suﬀered liver failure. Washielar fell behind on bill payments while she was in Richmond caring for her youngest, for the three months that she was seriously ill. Her daughter fully recovered, but her life unravelled with the weight of hospital bills and housing payments. Her family life became a series of stops at short-term housing since she and her boyfriend couldn’t apply for a mortgage on their own. She turned to Good Shepherd Housing, which she knew was in her community. Through the organization she was finally able to provide longer-term housing for her family. The nonprofit helped to minimize stress, helping Washielar get connected to the additional services she needed. Now her children are much happier, and they are benefitting from a stable school environment. Washielar has more opportunity to participate in their classrooms. She takes pride in the changes she sees in herself, but also the changes that her kids see in her. “My kids say, ‘Mom is really doing what she needs to do for us.’ It really makes me feel good as a mom. Now we can have dinner together...it just feels good.”

Washielar and her family no longer have the stress of moving from place to place. “Good Shepherd has given me stability for my kids,” she says. “It’s up to me to make it work.”

of Good Shepherd Housing &amp; Family Services clients have incomes under $30,800 for a family of four.

According to census data, in many low-income working families, child care absorbs nearly

recent immigrants from Spanish-speaking households, but there is also a growing African community. In addition, PGCRC teaches caregivers in the county how to provide better care and extend a helping hand to families who want a healthy and nurturing environment for their children. “Every family has a strength, and it’s up to us to build on the strength of that family,” says Center executive director Marti Worshtil.

of parents who participate in the

Meyer began supporting the Prince George’s Child Resource Center’s family literacy program in 2003, and has provided general operating support since 2007. Management assistance grants have supported fundraising planning in 2006 and a financial systems review in 2007 and 2008.

Angelica, a mother of three, has been involved with PGCRC for three years and her whole family has benefitted from the support. She’s watched her shy three-year-old son Danny blossom into an animated child who requests to be read to nightly. She attends regular workshops on subjects like parenting teens and family nutrition and is now carefully reading food labels and has enforced a “no soda” rule in the house. Class field trips with Danny have opened up a new world of possibility to her; she often returns to visit places a second time with her older children.

donations­and­no­fundraising­professional­on­staﬀ, Since 1995, Meyer has made

Meyer staff PARTICIPATE IN THE LARGER COMMUNITY by serving

WE CONNECT DONORS WITH GRANTEES that

on many boards, commitees, and working groups.

meet their interests. We serve as matchmakers for grantees that share common interests and goals.

SUSTAIN and raise the visibility

attention and have SPARKED

We are committed to

RAISING THE VOICE AND VISIBILITY OF THE

COMMUNICATING LEVERAGING We provide timely information and resources through our website and e-newsletters. We RAISE THE VISIBILITY of WE LEVERAGE MILLIONS OF DOLLARS

some of our most effective grantees.

of local and national funding for our grantees.

The Meyer Foundation received a rare “triple crown” from the Center for Effective Philanthropy’s Grantee Perception Report©, which provides comparative candid feedback on grantee perceptions. Meyer scored very high rankings in the most important measures of foundation effectiveness: IMPACT ON THE COMMUNITY, IMPACT ON GRANTEES’ FIELDS, and CREATING SOCIAL IMPACT.

MEYER FOUNDATION BOARD OF DIRECTORS AND OFFICERS TOP­ROW:

We know that experts say that poverty will be even worse in 2010, which will continue to have a significant impact on families. Giving generously to the nonprofits that support low-income people will go a long way toward ensuring the stability of our communities. To learn more about or to support the three organizations featured in this report and the other carefully vetted grantees we fund, visit

To learn about the carefully vetted grantees that we fund, use our searchable database at