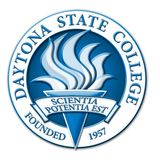 As a young college graduate, Anna Thornton is already in a position where she’s able to pursue her passion. She’s practically surrounded by it. Anna graduated from Daytona State College in the spring of 2012 before transferring to Stetson University where she earned her BS in Marine Biology.

She now serves as Lab Manager at the Whitney Laboratory for Marine Bioscience on the border of St. Johns and Flagler counties. With its location on a narrow strip of land between the Atlantic Ocean and Matanzas River, it’s hard to imagine a better place for someone who loves the marine environment.

Anna was born and raised in Alabama, land-locked in the deep country as she called it, yet always dreamed about being around the water. She moved to Florida in 1998, became scuba certified two years later, and her life has revolved around the water ever since.

That made Daytona State a logical place to begin her college education, though DSC’s marine science program was still in its infancy. Anna was among the first students who were part of the Institute of Marine and Environmental Studies (IMES), established by Dr. Debra Woodall in 2010. Anna took full advantage of what was being offered, recognizing how important hands-on experience would be for her future.

“In my last semester at DSC, Dr. Woodall started the program that allowed me to go out into the field for the first time,” Anna said. “She showed me techniques I wound up using quite frequently, and still do. I am happy that current DSC students have this program now to prepare them for real-life work in the marine field.”

After graduating from Stetson in the fall of 2016, Anna volunteered at Whitney through the Liao Lab before joining its Osborne Lab full-time in the spring of 2018. The lab specializes in biogeochemistry, which is the study of elemental cycling in the soil and water of Florida’s estuaries, specifically in regards to carbon, nitrogen and phosphorus.

“Estuaries have been coined as the kidneys of our waterways,” said Anna. “They filter out many potential hazards before the water reaches our oceans, so studying how these important nutrients are fluxed, stored and fixed tells us a lot about the health of our local waterways.”

Though her job title may say lab manager, Anna still actively participates in the fieldwork she fell in love with at Daytona State, and which she describes as her favorite pastime. “I have always had a passion for conservation, so field work and contributing to the health of our local ecosystems is very rewarding.”

One of the benefits of her career is that every time she sets foot on a boat, steps into the water, or explores places most people never get to see firsthand, it’s always a new and unpredictable adventure. For some, the lifestyle that comes with her job may be too adventurous, but for Anna there is always something exciting to see and learn, and the experiences can’t be found anywhere else.

Like the time she was surveying an oyster reef, thigh-deep in water, and a curious dolphin wanted to know what she was doing, swimming so close Anna could reach out and touch him.

She also offered a humorous warning for anyone else interested in doing what she’s doing. “Florida salt marshes and swamps can be some of the most inhospitable field sites. The heat is real, and it is not for the weary!” That said, Anna could not have been better prepared for the challenges she would face with her current job. She was quick to point out the role Daytona State played, especially Dr. Woodall, whom she described as “absolutely amazing.”

“My biology classes prepared me by providing the very foundation of science I depend on every day at work, and without DSC professors pushing me, along with a great curriculum, I would not have been ready for classes at Stetson, and the work I do now.”

The field study component of IMES provided Anna with another valuable learning experience, and it’s an important tool for students earning their AA at Daytona State and planning to transfer to other four-year universities in Florida. The education plan created for marine science students at DSC was designed with that in mind, which allowed Anna to easily transfer to Stetson for her bachelor’s degree. But it’s the field study, something rarely seen in other two-year marine science programs, which gives DSC students a leg up on other transfers. Having the Atlantic Ocean practically in our back yard is another advantage.

Anna emphasized how critical all of that has been for herself, and made two recommendations for those interested in pursuing a similar career path: start volunteering, and get the lab and field experience.

“You need a healthy balance of both to be considered for a job in our field, and you will be well-rounded. For people like myself, who work and have kids while in school, it can be challenging to find the time to volunteer, but if you truly love this field, you will have to dig deep at times. The reward is worth it. Take power naps where you can and keep trucking until you meet your goals!”