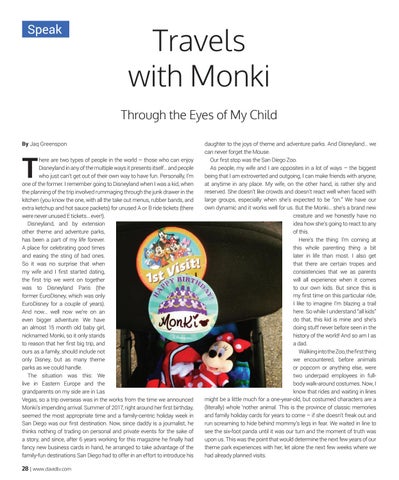 Travels with Monki Through the Eyes of My Child

here are two types of people in the world – those who can enjoy Disneyland in any of the multiple ways it presents itself… and people who just can’t get out of their own way to have fun. Personally, I’m one of the former. I remember going to Disneyland when I was a kid, when the planning of the trip involved rummaging through the junk drawer in the kitchen (you know the one, with all the take out menus, rubber bands, and extra ketchup and hot sauce packets) for unused A or B ride tickets (there were never unused E tickets… ever!). Disneyland, and by extension other theme and adventure parks, has been a part of my life forever. A place for celebrating good times and easing the sting of bad ones. So it was no surprise that when m wi e and ﬁrst started dating, the ﬁrst tri we went on together was to Disneyland Paris (the former EuroDisney, which was only EuroDisney for a couple of years). And now… well now we’re on an even bigger adventure. We have an almost 15 month old baby girl, nicknamed Monki, so it only stands to reason that her ﬁrst big tri , and ours as a family, should include not only Disney, but as many theme parks as we could handle. The situation was this: We live in Eastern Europe and the grandparents on my side are in Las Vegas, so a trip overseas was in the works from the time we announced onki s im ending arrival. ummer o , right around her ﬁrst birthda , seemed the most appropriate time and a family-centric holiday week in an Diego was our ﬁrst destination. ow, since dadd is a ournalist, he thinks nothing of trading on personal and private events for the sake of a stor , and since, a ter ears working or this maga ine he ﬁnall had fancy new business cards in hand, he arranged to take advantage of the family-fun destinations San Diego had to offer in an effort to introduce his

daughter to the joys of theme and adventure parks. And Disneyland… we can never forget the Mouse. ur ﬁrst sto was the an Diego oo. As people, my wife and I are opposites in a lot of ways – the biggest being that I am extroverted and outgoing, I can make friends with anyone, at anytime in any place. My wife, on the other hand, is rather shy and reserved. She doesn’t like crowds and doesn’t react well when faced with large groups, especially when she’s expected to be “on.” We have our own dynamic and it works well for us. But the Monki… she’s a brand new creature and we honestly have no idea how she’s going to react to any of this. Here’s the thing: I’m coming at this whole parenting thing a bit later in life than most. I also get that there are certain tropes and consistencies that we as parents will all experience when it comes to our own kids. But since this is m ﬁrst time on this articular ride, I like to imagine I’m blazing a trail here. So while I understand “all kids” do that, this kid is mine and she’s doing stuff never before seen in the history of the world! And so am I as a dad. alking into the oo, the ﬁrst thing we encountered, before animals or popcorn or anything else, were two underpaid employees in fullbod walk around costumes. ow, know that rides and waiting in lines might be a little much for a one-year-old, but costumed characters are a (literally) whole ‘nother animal. This is the province of classic memories and family holiday cards for years to come – if she doesn’t freak out and run screaming to hide behind mommy’s legs in fear. We waited in line to see the six-foot panda until it was our turn and the moment of truth was upon us. This was the point that would determine the next few years of our theme park experiences with her, let alone the next few weeks where we had already planned visits.