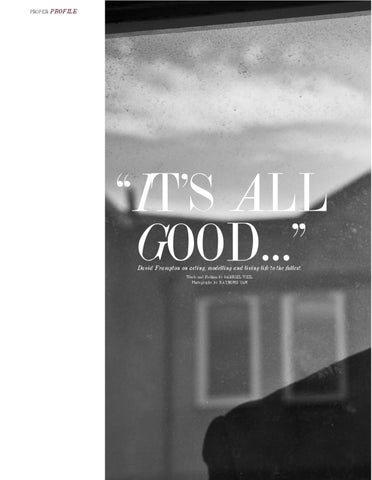 Acting is in the family. David's father was an actor at the

First the Bird Fell, a 2011 short film being shown in festivals through-

Royal Shakespeare Company, time during which a young David could

out Europe. He plays a retired runner in the process of remembering

watch stage performances, which, according to him, gave him a clear

his past. "We shot in Wales for four days. It rained non-stop, it was

idea of what he wanted to do for a living since very early in life.

freaking cold and I was wearing a vest and shorts most of the time",

He's been working in commercial movies, feature films and

he remembers with a laugh. 2011 has been a year of intense work for

film editorials, and is loving every new job. About the roles he plays, he

Frampton, who just got back from Turkey, where he starred in another

short movie. "The place was beautiful and I was treated like a prince."

The 34 year-old actor studied acting back at home, in Northamptonshire, at age 17. It was a three-year course he left six months early to move to London. The move led to a number of experiences that he remembers with a grim: "I worked as carpenter, delivery

He’s looking forward to experimenting with roles of differ-

man, and managed bars and clubs in Chelsea." Then came model-

ent sorts: “I’d like to play someone vulnerable, an outcast, disabled… I

ling, which took him around the world and, as he puts it, "was stupid

want to go for the whole spectrum.”

money for hardly doing anything." David modelled for several years to

David is enjoying himself like never before. “To me, every-

follow, until, three years ago, he decided to go back to his true passion

thing just seems to flow. I used to be a pessimist, looking for the bad in

of acting. All his life experience was key to shape the actor he is now.

everything. Now I’m happy all the time. I’ve realised there’s no bad. It’s

it without experience to draw from", he comments.

Coat from a selection. Trousers by PRADA, scarf by BURBERRY.

Military shirt from a vintage shop, about ÂŁ10. Watch, JAEGER LE COULTRE, circa 1954.

This page: blazer by GIORGIO ARMANI, jumper by UNIQLO, jeans by LEVI’S. Opposite page: trousers from a SELECTION, shirt by YVES SAINT LAURENT. 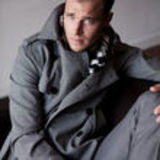