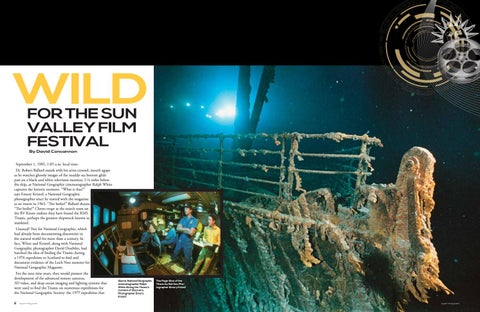 WILD FOR THE SUN VALLEY FILM FESTIVAL By David Concannon

September 1, 1985, 1:05 a.m. local time. Dr. Robert Ballard stands with his arms crossed, mouth agape as he watches ghostly images of the muddy sea bottom glide past on a black and white television monitor, 2 ½ miles below the ship, as National Geographic cinematographer Ralph White captures the historic moment. “What is that?” says Emory Kristof, a National Geographic photographer since he started with the magazine as an intern in 1963. “The boiler!” Ballard shouts. “The boiler!” Cheers erupt as the search team on the RV Knorr realizes they have found the RMS Titanic, perhaps the greatest shipwreck known to mankind. Unusual? Not for National Geographic, which had already been documenting discoveries in the natural world for more than a century. In fact, White and Kristof, along with National Geographic photographer David Doubilet, had hatched the idea of finding the Titanic during a 1976 expedition to Scotland to find and document evidence of the Loch Ness monster for National Geographic Magazine. For the next nine years, they would pioneer the development of the advanced remote cameras, 3D video, and deep ocean imaging and lighting systems that were used to find the Titanic on numerous expeditions for the National Geographic Society: the 1977 expedition that 2

This Page: Bow of the Titanic by Nat Geo Photographer Emory Kristof

Above and Right: National Geographic&#39;s WILD invites viewers into the wonders of our outside world.

discovered the deep hot-water volcanic vents of the Galapagos Rift; a 1983 expedition to document the pristine remains of the warships Hamilton and Scourge, which sank in Lake Ontario during the War of 1812; and a similar expedition later in 1983 to document the wreck of the Breadalbane, which sank in the Northwest Passage, 500 miles north of the Arctic Circle, while searching for the lost Franklin Expedition in 1853. All were testing grounds for the equipment used to find the Titanic, courtesy of National Geographic’s long-term commitment to exploring and documenting the natural world. Inspiring? Definitely, at least to one young, would-be filmmaker named James Cameron, who would go from exploring the lakes and rivers by his home to dive to the Titanic numerous times and makes a handful of small movies named “Titanic,” “The Abyss,” “Avatar,” “Terminator,” and “Terminator 2.” Then Cameron took a break from Hollywood to make a 7-mile dive into the Mariana Trench and become a National Geographic Explorer-in-Residence. In fact, if you’re a person like me, i.e., someone who spent their youth dreaming about exploration, or simply enjoying the outdoor environment, and you enjoy thoughtful programming, something intelligent, educational or informative about our natural world, typically only one name comes to mind: National Geographic. And, if you are a resident of or visitor to Sun Valley and you are seeking a front row seat to adventure and exploration, or a behind-thescenes look at documenting our natural world, look no further than the Sun Valley Film Festival, where National Geographic is a founding sponsor and an enthusiastic participant. Above: James Cameron and the Deep Sea Challenge

The programming that made National Geographic a household word – lions roaming the African savannah, sharks, wildlife and exploration

of our natural world, is thriving on Nat Geo WILD, which debuted in 2010. Nat Geo WILD bills itself as “the No. 1 destination for the best wildlife content in the world,” and it continues the tradition of drawing upon the cutting-edge work of the many explorers, filmmakers and scientists of the National Geographic Society for its content.t. The network’s commitment is to provide extraordinary wildlife programming that inspires people to care about the planet, and it demonstrates this commitment through its sponsorship of the Sun Valley Film Festival. According to Chris Albert, Senior Vice President of Communications Worldwide and Talent Relations for the National Geographic Channels: “Nat Geo WILD has been a partner with the Sun Valley Film Festival since year one. Our similar values really make it the perfect fit. “We’ve had the honor of hosting some We find that the people who attend the film festival of the most well-known and iconic love animals as much as we do, and the film festival filmmakers in years past, and we’re encourages using and appreciating the value of storytelling to change the world.” just as dedicated to celebrating new

talent. WILD TO INSPIRE is an incredible opportunity to discover and support the next generation of rising stars.” —Teddy Grennan, Executive Director, Sun Valley Film Festival:

One of the hallmarks of this partnership is the WILD TO INSPIRE filmmaking contest, the brainchild of Albert and Teddy Grennan, Executive Director and Co-founder of the Sun Valley Film Festival. Consistent with the Film Festival’s ideal of showcasing and fostering new talent in filmmaking, WILD TO INSPIRE is designed to find and promote the next David Attenborough. “We’ve had the honor of hosting some of the most well-known and iconic filmmakers in years past,” says Grennan, “and we’re just as dedicated to celebrating new talent. WILD TO INSPIRE is an incredible opportunity to discover and support the next generation of rising stars.” Inspired young filmmakers are asked to submit short films capturing stories of individuals letting the wild into their own lives. The goal is to captivate viewers and svpn-mag.com

He has arranged financing for hundreds more films, including “Slingblade,” “The Apostle,” and “Monster’s Ball.”

The Salon Series represents National Geographic’s commitment to quality filmmaking, and this is obvious from the caliber of the moderator and guests.

Prentice has an encyclopedic knowledge and love of film. He has written about film since 1980, interviewing hundreds of filmmakers, and his reporting on film has appeared in Variety, The Hollywood Reporter, The Guardian, and newspapers throughout the U.S.

“My life’s passion is to use my camera to inspire others to fall in love with the wild. The same encourage them to seek out the way I have.” wild in their own backyards. The top three finalists are invited to the — Felipe DeAndrade, 2015 Sun Valley Film Festival to screen winner, WILD TO INSPIRE their films for festival attendees, contest. a panel of judges and Nat Geo WILD executives. The winner is announced at the festival’s closing ceremony, and they receive an expedition to experience and document wildlife in some of the most exotic corners of the world for Nat Geo WILD viewers.

If 2015’s WILD TO INSPIRE contest winner, Filipe DeAndrade, is any guide, Nat Geo WILD and the Film Festival have succeeded beyond their wildest expectations. DeAndrade, who emigrated to America from Brazil with his mother and grew up under challenging circumstances, submitted a passionate short film entitled “Adapt,” which blew the judges out of the water. In it, DeAndrade, who describes nature as “my savior,” documents his through-hike on the Appalachian Trail and the stunning imagery of the natural world he has collected in just a few short years since his graduation from film school. DeAndrade proclaimed: “My life’s passion is to use my camera to inspire others to fall in love with the wild. The same way I have.” 6

Seidler won an Oscar for Original Screenplay for “The King’s Speech” – the movie itself won an Academy Award for Best Film. Seidler, who has residences in Ketchum, Santa Monica and New Zealand, has a film in pre-production set in China, and another in development set in Rwanda. Elwes has either produced or executive produced more than 40 films, including “Lee Daniels’ The Butler,” “All Is Lost” starring Robert Redford, and the Oscar-winning hit “Dallas Buyers Club.”

If you are looking for exceptional filmmaking and inspiration, you can certainly find it at the Sun Valley Film Festival in March, and every month beyond that on National Geographic and Nat Geo WILD. Then go outside, and explore the beautiful world you live in.

DeAndrade’s film has inspired the theme of the 2016 WILD TO INSPIRE contest: finding inspiration in the wild and seeking it out in our own backyards. According to Geoff Daniels, the Executive Vice President and General Manager of Nat Geo WILD who looked like a proud father when he announced DeAndrade as the contest winner at the closing of the 2015 Sun Valley Film Festival: “Felipe embodies our theme of ‘Let the WILD In’ — his energy and enthusiasm for nature and wildlife jumps off the screen. We look forward to seeing that same passion come across in the stories told through this year’s films.” The Nat Geo WILD/Sun Valley Film Festival partnership extends to a new event, the Salon Series, described as “an intimate ‘lunch on your lamp’ with top industry experts sharing insider tips and stories about the industry and their careers.” The Salon talks will be held from 12pm – 1pm on March 3, 4, 5 at the Festival headquarters, for Festival and Party Pass holders. The moderator is George Prentice, Editor of Boise Weekly, and special guests each day are National Geographic Fellow and investigative

The National Geographic Sponsored Salon Series talks will be held from 12pm – 1pm on March 3, 4, 5 at the Festival headquarters, for Festival and Party Pass holders. Check schedule on the SVFF website for information about WILD to Inspire: sunvalleyfilmfestival.org svpn-mag.com 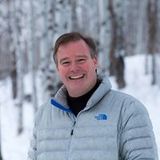