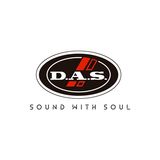 DAS was founded in Valencia, Spain by Juan Alberola Calabuig. The company was originally known as Dynamic and Sound, the name was later changed to DAS Audio. DAS Audio is one of the world’s leading manufacturers of loudspeaker systems, power amplification, signal processing, and related components. For over the last four decades, DAS Audio products have been found on tour with the world’s greatest performing artists and installed in many of the most prestigious facilities.