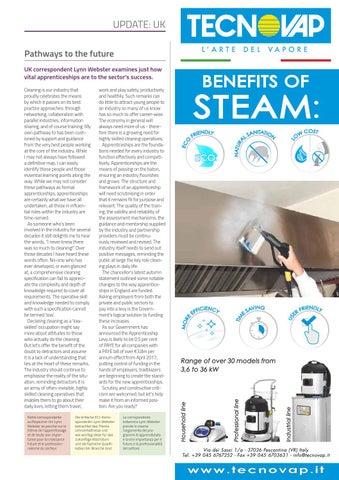 UPDATE: UK Pathways to the future UK correspondent Lynn Webster examines just how vital apprenticeships are to the sector’s success. Cleaning is our industry that proudly celebrates the means by which it passes on its best practice approaches: through networking, collaboration with parallel industries, information sharing, and of course training. My own pathway to has been cushioned by support and guidance from the very best people working at the core of the industry. While I may not always have followed a definitive map, I can easily identify those people and those essential learning points along the way. While we may not consider these pathways as formal apprenticeships, apprenticeships are certainly what we have all undertaken; all those in influential roles within the industry are time-served. As someone who’s been involved in the industry for several decades it still delights me to hear the words, “I never knew there was so much to cleaning!” Over those decades I have heard these words often. No-one who has ever developed, or even glanced at, a comprehensive cleaning specification can fail to appreciate the complexity and depth of knowledge required to cover all requirements. The operative skill and knowledge needed to comply with such a specification cannot be termed ‘low’. Declaring cleaning as a ‘lowskilled’ occupation might say more about attitudes to those who actually do the cleaning. But let’s offer the benefit of the doubt to detractors and assume it is a lack of understanding that lies at the heart of these remarks. The industry should continue to emphasise the reality of the situation; reminding detractors it is an army of often-invisible, highly skilled cleaning operatives that enables them to go about their daily lives, letting them travel, Notre correspondante au Royaume-Uni Lynn Webster se penche sur le thème de l’apprentissage et de toute son importance pour la croissance future et le professionnalisme du secteur.

work and play safely, productively and healthily. Such remarks can do little to attract young people to an industry so many of us know has so much to offer career-wise. The economy in general will always need more of us - therefore there is a growing need for highly skilled cleaning operatives. Apprenticeships are the foundations needed for every industry to function effectively and competitively. Apprenticeships are the means of passing on the baton, ensuring an industry flourishes and grows. The structure and framework of an apprenticeship will need scrutinising in order that it remains fit for purpose and relevant. The quality of the training, the validity and reliability of the assessment mechanisms, the guidance and mentorship supplied by the industry and partnership providers must be continuously reviewed and revised. The industry itself needs to send out positive messages, reminding the public at large the key role cleaning plays in daily life. The chancellor’s latest autumn statement outlined some notable changes to the way apprenticeships in England are funded. Asking employers from both the private and public sectors to pay into a levy is the Government’s logical solution to funding these increases. As our Government has announced the Apprenticeship Levy is likely to be 0.5 per cent of PAYE for all companies with a PAYE bill of over €3.8m per annum effect from April 2017, putting control of funding in the hands of employers, trailblazers are beginning to create the standards for the new apprenticeships. Scrutiny and constructive criticism are welcomed; but let’s help make it from an informed position. Are you ready?