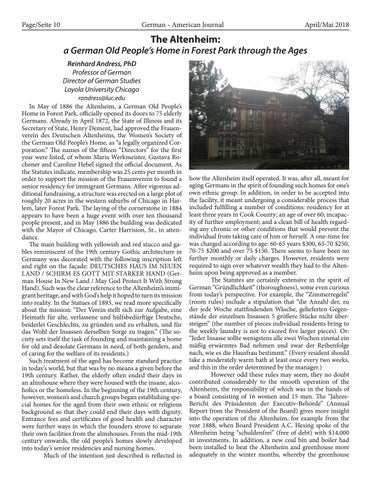 a German Old People’s Home in Forest Park through the Ages Reinhard Andress, PhD Professor of German Director of German Studies Loyola University Chicago randress@luc.edu In May of 1886 the Altenheim, a German Old People’s Home in Forest Park, officially opened its doors to 75 elderly Germans. Already in April 1872, the State of Illinois and its Secretary of State, Henry Dement, had approved the Frauenverein des Deutschen Altenheims, the Women’s Society of the German Old People’s Home, as “a legally organized Corporation.” The names of the fifteen “Directors” for the first year were listed, of whom Maria Werkmeister, Gustava Rochener and Caroline Hebel signed the official document. As the Statutes indicate, membership was 25 cents per month in order to support the mission of the Frauenverein to found a senior residency for immigrant Germans. After vigorous additional fundraising, a structure was erected on a large plot of roughly 20 acres in the western suburbs of Chicago in Harlem, later Forest Park. The laying of the cornerstone in 1884 appears to have been a huge event with over ten thousand people present, and in May 1886 the building was dedicated with the Mayor of Chicago, Carter Harrision, Sr., in attendance. The main building with yellowish and red stucco and gables reminiscent of the 19th century Gothic architecture in Germany was decorated with the following inscription left and right on the façade: DEUTSCHES HAUS IM NEUEN LAND / SCHIRM ES GOTT MIT STARKER HAND (German House In New Land / May God Protect It With Strong Hand). Such was the clear reference to the Altenheim’s immigrant heritage, and with God’s help it hoped to turn its mission into reality. In the Statues of 1893, we read more specifically about the mission: “Der Verein stellt sich zur Aufgabe, eine Heimath für alte, verlassene und hülfsbedürftige Deutsche, beiderlei Geschlechts, zu gründen und zu erhalten, und für das Wohl der Insassen derselben Sorge zu tragen.” (The society sets itself the task of founding and maintaining a home for old and desolate Germans in need, of both genders, and of caring for the welfare of its residents.) Such treatment of the aged has become standard practice in today’s world, but that was by no means a given before the 19th century. Rather, the elderly often ended their days in an almshouse where they were housed with the insane, alcoholics or the homeless. In the beginning of the 19th century, however, women’s and church groups began establishing special homes for the aged from their own ethnic or religious background so that they could end their days with dignity. Entrance fees and certificates of good health and character were further ways in which the founders strove to separate their own facilities from the almshouses. From the mid-19th century onwards, the old people’s homes slowly developed into today’s senior residencies and nursing homes. Much of the intention just described is reflected in

how the Altenheim itself operated. It was, after all, meant for aging Germans in the spirit of founding such homes for one’s own ethnic group. In addition, in order to be accepted into the facility, it meant undergoing a considerable process that included fulfilling a number of conditions: residency for at least three years in Cook County; an age of over 60; incapacity of further employment; and a clean bill of health regarding any chronic or other conditions that would prevent the individual from taking care of him or herself. A one-time fee was charged according to age: 60-65 years $300, 65-70 $250, 70-75 $200 and over 75 $150. There seems to have been no further monthly or daily charges. However, residents were required to sign over whatever wealth they had to the Altenheim upon being approved as a member. The Statutes are certainly extensive in the spirit of German “Gründlichkeit” (thoroughness), some even curious from today’s perspective. For example, the “Zimmerregeln” (room rules) include a stipulation that “die Anzahl der, zu der jede Woche stattfindenden Wäsche, gelieferten Gegenstände der einzelnen Insassen 5 größere Stücke nicht übersteigen” (the number of pieces individual residents bring to the weekly laundry is not to exceed five larger pieces). Or: “Jeder Insasse sollte wenigstens alle zwei Wochen einmal ein mäßig erwärmtes Bad nehmen und zwar der Reihenfolge nach, wie es die Hausfrau bestimmt.” (Every resident should take a moderately warm bath at least once every two weeks, and this in the order determined by the manager.) However odd these rules may seem, they no doubt contributed considerably to the smooth operation of the Altenheim, the responsibility of which was in the hands of a board consisting of 16 women and 15 men. The “JahresBericht des Präsidenten der Executiv-Behörde” (Annual Report from the President of the Board) gives more insight into the operation of the Altenheim, for example from the year 1888, when Board President A.C. Hesing spoke of the Altenheim being “schuldenfrei” (free of debt) with $14,000 in investments. In addition, a new coal bin and boiler had been installed to heat the Altenheim and greenhouse more adequately in the winter months, whereby the greenhouse