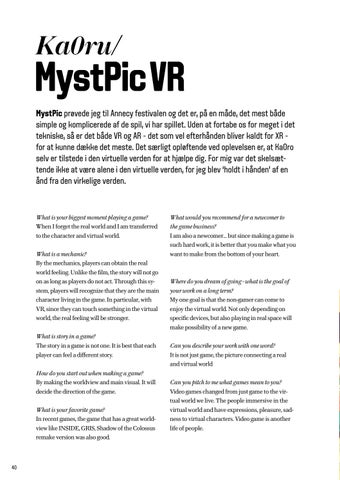 What is your biggest moment playing a game?

What would you recommend for a newcomer to

When I forget the real world and I am transferred

to the character and virtual world.

I am also a newcomer... but since making a game is such hard work, it is better that you make what you

What is a mechanic?

want to make from the bottom of your heart.

By the mechanics, players can obtain the real world feeling. Unlike the film, the story will not go on as long as players do not act. Through this sy-

Where do you dream of going - what is the goal of

stem, players will recognize that they are the main

your work on a long term?

character living in the game. In particular, with

My one goal is that the non-gamer can come to

VR, since they can touch something in the virtual

enjoy the virtual world. Not only depending on

world, the real feeling will be stronger.

specific devices, but also playing in real space will make possibility of a new game.

Can you describe your work with one word?

player can feel a different story.

It is not just game, the picture connecting a real and virtual world

How do you start out when making a game? By making the worldview and main visual. It will

Can you pitch to me what games mean to you?

decide the direction of the game.

Video games changed from just game to the virtual world we live. The people immersive in the

What is your favorite game?

In recent games, the game that has a great world-

ness to virtual characters. Video game is another 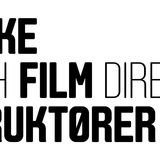