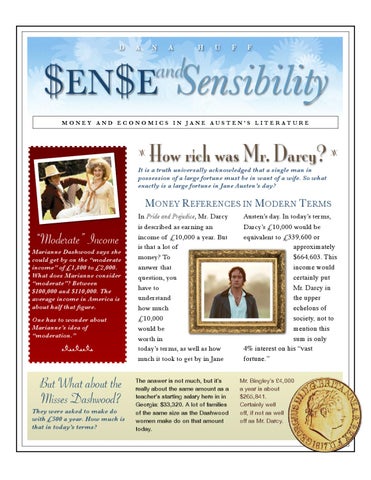 How rich was Mr. Darcy?

It is a truth universally acknowledged that a single man in possession of a large fortune must be in want of a wife. So what exactly is a large fortune in Jane Austen’s day?

But What about the Misses Dashwood?

They were asked to make do with £500 a year. How much is that in today’s terms?

In Pride and Prejudice, Mr. Darcy is described as earning an income of £10,000 a year. But is that a lot of money? To answer that question, you have to understand how much £10,000 would be worth in today’s terms, as well as how much it took to get by in Jane The answer is not much, but it’s really about the same amount as a teacher’s starting salary here in in Georgia: $33,320. A lot of families of the same size as the Dashwood women make do on that amount today.

HOW MUCH DID THINGS COST?

Though Jane Austen’s heroines lucked into rich husbands and weren’t quite as poor as they’d have liked us to believe they were, one thing we do have to keep under consideration is that almost nothing cost what it does today. Some items were indeed cheaper by modern standards, but many items were a lot more expensive. Silk stockings cost 12 shillings, which is the modern equivalent of over $40! Ladies today would never spend so much on pantyhose. Wool stockings cost the modern equivalent of over $8.00 a pair, which is still much more than a package of plain white cotton socks. A white silk handkerchief, a necessity for any gentleman, cost the modern equivalent of over $20.00, while a pair of gloves cost about $13.50. A letter from Jane Austen dated 1813 states that she spent 6 shillings for a handkerchief and 4 shillings for gloves. On the other hand, a simple white dress only cost about $20.00, which is certainly less than ladies today would pay for the same. A fan, necessary for

flirting in addition to keeping cool, would cost about $17.00. A simple pair of shoes would run from about $19.00 to $37.00. Walking boots would be about $134.00. Cotton fabric cost about $3.36 a yard, and many young ladies would buy the fabric to make their own dresses rather than have dresses made by a tailor. Off-the-rack clothes didn’t exist. You would spend about $20.00 to buy enough fabric to make a dress. Velveteen fabric cost a little more at about $9.50 a yard. If you wanted a silk dress, you would have had to spend nearly $90.00 to purchase the fabric. Purchasing a dress from a dressmaker cost about twice as much as making it yourself, so it stands to reason a simple cotton dress would be about $40.00, while a silk dress would run about $180.00. Keeping a carriage would cost you about $60,000 a year, which is significantly more than the average cost to drive a car, which is usually less than $20,000, depending on the kind of car you drive.

Most people in Jane Austen’s novels are landed gentry and earned their living from renting their land. Even Mr. Bennet, who was not rich, was a landowner. He probably earned about $110,000 a year, which brings a bit of perspective to the notion that the Bennets were poor; however, it must be noted that they spent all they earned, and it can be assumed that because of the high cost of almost everything, they were a good deal poorer in Jane Austen’s day than they would be had they lived in our own time. Interestingly enough, only the poor in Austen’s day did not live on credit. Gentlemen would have had credit accounts with a variety of suppliers, and very few customers paid cash. In fact, bad debts caused a lot of problems for smaller businesses when they couldn’t collect on their credit accounts. The middle and upper classes couldn’t imagine surviving on an income of less than $5,000 to $10,000 a year; if your income was less, you probably had to supplement the interest you earned from your land by working for a living. Oh, the shame!

Jane Austen earned only about $38,000 in today’s terms for her writing during her lifetime.

How rich was Mr. Darcy really? How poor were the Dashwoods? How much did it cost to live in Jane Austen's day?