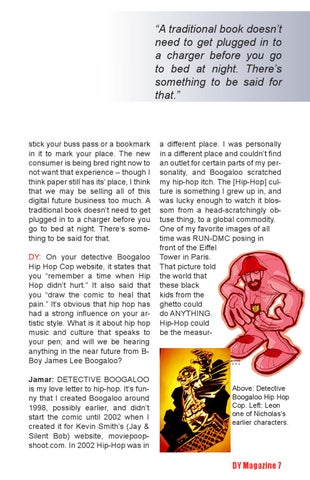 “A traditional book doesn’t need to get plugged in to a charger before you go to bed at night. There’s something to be said for that.”

stick your buss pass or a bookmark in it to mark your place. The new consumer is being bred right now to not want that experience – though I think paper still has its’ place, I think that we may be selling all of this digital future business too much. A traditional book doesn’t need to get plugged in to a charger before you go to bed at night. There’s something to be said for that. DY: On your detective Boogaloo Hip Hop Cop website, it states that you “remember a time when Hip Hop didn’t hurt.” It also said that you “draw the comic to heal that pain.” It’s obvious that hip hop has had a strong influence on your artistic style. What is it about hip hop music and culture that speaks to your pen; and will we be hearing anything in the near future from BBoy James Lee Boogaloo? Jamar: DETECTIVE BOOGALOO is my love letter to hip-hop. It’s funny that I created Boogaloo around 1998, possibly earlier, and didn’t start the comic until 2002 when I created it for Kevin Smith’s (Jay &amp; Silent Bob) website, moviepoopshoot.com. In 2002 Hip-Hop was in

a different place. I was personally in a different place and couldn’t find an outlet for certain parts of my personality, and Boogaloo scratched my hip-hop itch. The [Hip-Hop] culture is something I grew up in, and was lucky enough to watch it blossom from a head-scratchingly obtuse thing, to a global commodity. One of my favorite images of all time was RUN-DMC posing in front of the Eiffel Tower in Paris. That picture told the world that these black kids from the ghetto could do ANYTHING. Hip-Hop could be the measur- 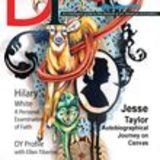