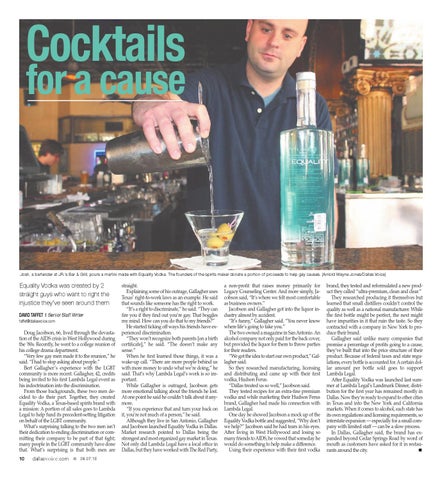 Josh, a bartender at JR.’s Bar &amp; Grill, pours a martini made with Equality Vodka. The founders of the spirits maker donate a portion of proceeds to help gay causes. (Arnold Wayne Jones/Dallas Voice)

Equality Vodka was created by 2 straight guys who want to right the injustice they’ve seen around them daVid TaFFeT | Senior Staff Writer taffet@dallasvoice.com

Doug Jacobson, 66, lived through the devastation of the AIDS crisis in West Hollywood during the ’80s. Recently, he went to a college reunion of his college drama department. “Very few gay men made it to the reunion,” he said. “I had to stop asking about people.” Bert Gallagher’s experience with the LGBT community is more recent. Gallagher, 42, credits being invited to his ﬁrst Lambda Legal event as his indoctrination into the discrimination. From those backgrounds, these two men decided to do their part. Together, they created Equality Vodka, a Texas-based spirits brand with a mission: A portion of all sales goes to Lambda Legal to help fund its precedent-setting litigation on behalf of the LGBT community. What’s surprising talking to the two men isn’t their dedication to ending discrimination or committing their company to be part of that ﬁght; many people in the LGBT community have done that. What’s surprising is that both men are 10

straight. Explaining some of his outrage, Gallagher uses Texas’ right-to-work laws as an example. He said that sounds like someone has the right to work. “It’s a right to discriminate,” he said. “They can ﬁre you if they ﬁnd out you’re gay. That boggles my mind. How can you do that to my friends?” He started ticking off ways his friends have experienced discrimination. “They won’t recognize both parents [on a birth certiﬁcate],” he said. “The doesn’t make any sense.” When he ﬁrst learned those things, it was a wake-up call. “There are more people behind us with more money to undo what we’re doing,” he said. That’s why Lambda Legal’s work is so important. While Gallagher is outraged, Jacobson gets more emotional talking about the friends he lost. At one point he said he couldn’t talk about it anymore. “If you experience that and turn your back on it, you’re not much of a person,” he said. Although they live in San Antonio, Gallagher and Jacobson launched Equality Vodka in Dallas. Market research pointed to Dallas being the strongest and most organized gay market in Texas. Not only did Lambda Legal have a local ofﬁce in Dallas, but they have worked with The Red Party,

a non-proﬁt that raises money primarily for Legacy Counseling Center. And more simply, Jacobson said, “It’s where we felt most comfortable as business owners.” Jacobson and Gallagher got into the liquor industry almost by accident. “It’s funny,” Gallagher said. “You never know where life’s going to take you.” The two owned a magazine in San Antonio. An alcohol company not only paid for the back cover, but provided the liquor for them to throw parties for their readers. “We got the idea to start our own product,” Gallagher said. So they researched manufacturing, licensing and distributing and came up with their ﬁrst vodka, Hudson Ferus. “Dallas treated us so well,” Jacobson said. They tested recipes for an extra-ﬁne premium vodka and while marketing their Hudson Ferus brand, Gallagher had made his connection with Lambda Legal. One day he showed Jacobson a mock up of the Equality Vodka bottle and suggested, “Why don’t we help?” Jacobson said he had tears in his eyes. After living in West Hollywood and losing so many friends to AIDS, he vowed that someday he would do something to help make a difference. Using their experience with their ﬁrst vodka

brand, they tested and reformulated a new product they called “ultra-premium, clean and clear.” They researched producing it themselves but learned that small distillers couldn’t control the quality as well as a national manufacturer. While the ﬁrst bottle might be perfect, the next might have impurities in it that ruin the taste. So they contracted with a company in New York to produce their brand. Gallagher said unlike many companies that promise a percentage of proﬁts going to a cause, they’ve built that into the price structure of their product. Because of federal taxes and state regulations, every bottle is accounted for. A certain dollar amount per bottle sold goes to support Lambda Legal. After Equality Vodka was launched last summer at Lambda Legal’s Landmark Dinner, distribution for the ﬁrst year has remained mostly in Dallas. Now they’re ready to expand to other cities in Texas and into the New York and California markets. When it comes to alcohol, each state has its own regulations and licensing requirements, so interstate expansion — especially for a small company with limited staff — can be a slow process. In Dallas, Gallagher said, the brand has expanded beyond Cedar Springs Road by word of mouth as customers have asked for it in restaurants around the city. • 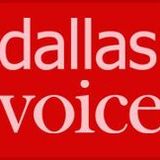