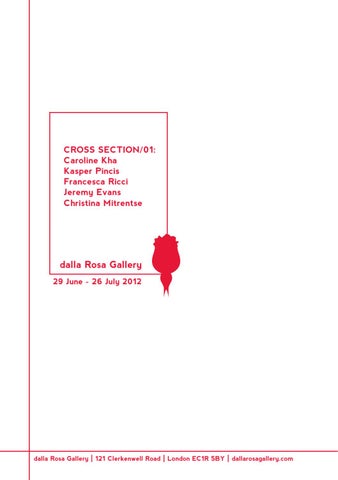 Cross Section/01 dalla Rosa Gallery is pleased to present Cross Section/01, a group exhibition of new work by Caroline Kha, Kasper Pincis, Francesca Ricci, Jeremy Evans, and Christina Mitrentse (29 June - 26 July 2012) Cross Section/01 inaugurates a series of exhibitions highlighting recent work by dalla Rosa’s artists, a snapshot of their ongoing practice. The show aims to emphasise the unifying characteristics of the artists, either stylistic or conceptual. Caroline Kha was born and studied Fine Art and Science in Australia before moving to London and starting a one-year residency at the Florence Trust in 2009. Her work was exhibited in Sydney, Tokyo, and London - her paintings and collages explore archetypal imagery, place and identity. Kasper Pincis studied at Camberwell College of Art, Goldsmiths, and Royal Academy Schools, he took part in exhibitions and projects in Turin, Berlin, Kraków, London. Although his practice ultimately manifests itself in the abstract, it primarily borrows formal aspects and materials from literature, academic theory and bureaucracy by using media such as newsprint, typewriters, carbon paper, pencil, and letraset. After studying Stage Design in Florence, Francesca Ricci moved to London and immersed herself in fringe theatre and art world. She showed in Italy and United Kingdom and has been active for years in the independent publishing scene. Francesca is part of Bozhinov/Ricci, a writer/artist duo sharing a communal field of interests, aesthetics and a cross-disciplinary approach to their research and work. Jeremy Evans is a multidisciplinary artist who works with video, audio, paper, and performance. After studying at the Sir John Cass School of Art and Chelsea College of Art Jeremy was part of the New Contemporaries (2008) and was selected for the exhibition Lines of Desire at the Oriel Davies Gallery (Newtown). Greek Artist and curator Christina Mitrentse studied at Chelsea College of Art and University of Greenwich. She has exhibited extensively in galleries, museums and public spaces including Liverpool Biennial, XV Biennale de Mediterranean Thess/nikiRome, ICA (London), NDSM-werf Amsterdam, Macedonian Museum of Contemporary Art, Departure Foundation (London). Christina’s drawing practice is highly descriptive and meticulous, it serves as a tool for critical enquiry - mapping time, philosophy and ultimately the construction of discrete worlds.

Kasper Pincis Education 2001 Camberwell College of Art, BTec Foundation Art with merit 2004 Goldsmiths College, Joint Honours BA Fine Art and History of Art 2:1 Degree 2007 Royal Academy Schools, PGdip Fine Art, Gold medal winner Exhbitions Feb 2006, Premiums- Royal Academy Schools interim show Aug - Nov 2006, ASP.KRK.RAS.LDN Wi nicz Castle, Kraków, Poland, group show Dec 2006, Everything to Lose- Brixton, London, group show June 2007 Royal Academy Schools Diploma Show- London Sep - Nov 2007, Identity- Martinart Gallery, Turin, Italy, group show May - Jun 2008, Illustrations of the Passes of the Alps- Parlour Project Space, London Nov 2008 – Jan 2009 Zero- Aanant &amp; Zoo, Berlin, Germany, group Show 25 - 27 Sep 2009, Open Studio, Deptford X, London 13 - 17 Jan 2010, PRINT NOW- BEARSPACE Gallery at London Art Fair Sep - Oct 2010, By Any Means, dalla Rosa Gallery, London (solo show) 5 &amp; 6 Nov 2011, Typee, Utrophia Project Space, Deptford High St, London Feb – Mar 2012, Perek, Aanant &amp; Zoo Gallery, Berlin (solo show) Statement I have always felt that my work is more driven by a literary impulse rather than a purely visual one. Although my practice ultimately manifests itself in the abstract, it primarily borrows formal aspects and materials from literature, academic theory and bureaucracy by using media such as newsprint, typewriters, carbon paper, pencil, and letraset. A key influence in my work are books on twentieth century exploration, such as the Kon-Tiki expedition and the conquest of Everest. What fascinates me most about these stories is not the actual achievement, but the particular sensibility portrayed. The explorers and scientists depicted in these books are almost exclusively the ‘archetypal bearded men’, yet by necessity they adopt very domestic arrangements. The other central tenet of my practice is the idea of art as something achieved through an economy of expression. To this end I generally use what might be termed low-fi or old fashioned technology that I am able to understand and manipulate directly to try and create maximum effect through minimum input (i.e. the typewriter). This aspect of my work has been strongly inspired by Henry David Thoreu’s book Walden, underground art, and publishing by the Solidarnosc movement in Poland.

opposite: Kasper Pincis, 15° Experiment With Commas (2012), typewriter on paper

Statement on Tabula Impressa Man is not born as a blank canvas but already carries elements from a communal, ancestral background. While researching these Jungian topics, I was shown a whole series of snapshots of signs collected on London’s pavements, marking impending engineering works. This colourful alphabet, besides its functionality of giving precise instructions to those trained to decode it, contained other qualities. The signs recalled or matched signs and symbols common to different fields of representation and systems of classification or description used by mankind across cultures and times. They also carried a contemplative quality to which one could respond individually according to its sensitivity, experience, knowledge. Moreover, the surrounding circumstances – the pattern of the pavement, the climatic conditions, the presence of other elements in the shot – helped creating impromptu compositions. The first part of the project, showcased in this exhibition, includes works from the series The present is enclosed within the ribcage* and Things shouldn’t be useful, they should just be* and is purely a highlight of those visual and symbolic qualities of the signs. The second part of the project, which I am developing with Kiril Bozhinov - who has taken the original snapshots of the signs - involves recreating or interpreting systems of representation from other disciplines through this given vocabulary. * Those titles are quotes respectively from thinker Elémire Zolla and poetess Maria Luisa Spaziani, whose works I have appreciated in different moments of my life. I recently learned the two were married for a period. opposite: Francesca Ricci,Tabula Impressa 7/12 (Things shouldn’t be useful, they should just be) above: Tabula Impressa 8/12 (Things shouldn’t be useful, they should just be), 2012, ink and pastels on paper

opposite: Christina Mitrentse, Anomalous God Is Not Great, graphite and silver pastel powder on paper

Christina Mitrentse, The Wounded Super-Selene I (2012), graphite, silver pastel and collage on paper

Cross Section/01 inaugurates a series of exhibitions highlighting recent work by dalla Rosa's artists, a snapshot of their ongoing practice. The exhibition brings together work by Caroline Kha, Kasper Pincis, Francesca Ricci, Jeremy Evans, and Christina Mitrentse. The show aims to emphasise the unifying characteristics of the artists, either stylistic or conceptual. Find further information at www.dallarosagallery.com 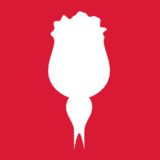