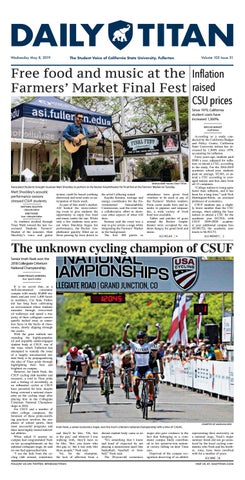 Associated Students brought musician Matt Shockley to perform in the Becker Amphitheater for Final Fest at the Farmers’ Market on Tuesday.

As students strolled through Titan Walk toward the last Associated Students Farmers’ Market of the semester, Matt Shockley’s voice and guitar

strums could be heard soothing distressed and tired souls in anticipation of finals week. As part of this week’s market, ASI hosted the stress-relieving event to give students the opportunity to enjoy free food and music under the sun. While only a few students were present when Shockley began his performance, the Becker Amphitheater quickly filled up as those passing by were drawn to

the artist’s alluring sound. Kaysha Kenney, wastage and energy coordinator for the Environmental Sustainability Commission, said the event was a collaborative effort to showcase other aspects of what ASI does. Kenney said the event was a way to give artists a stage while integrating the Farmers’ Market in the background. The first 100 guests in

attendance were given food vouchers to be used at any of the Farmers’ Market vendors. From carne asada fries and tamales to pupusas and empanadas, a wide variety of fresh food was available. Tables and patches of grass around the Becker Amphitheater were occupied by students hungry for good food and music. SEE RELAX

According to a study conducted by the California Budget and Policy Center, California State University tuition has increased by 1,360% since 1979, accounting for inflation. Forty years ago, students paid $500 a year, adjusted for inflation, to attend a CSU, according to the study. For the 2018-2019 academic school year, students paid on average, $7,303, to attend a CSU according to averaged tuition and fees data from all 23 campuses. “College tuition is rising quite faster than inflation, and it has been for a long time,” said Nick Huntington-Klein, an assistant professor of economics. CSUF students pay a slightly lower number than the CSU average, when adding the base tuition to attend a CSU for the academic year ($5,742), with CSUF 2019-2020 academic year additional campus fees ($1180.72), the academic year totals to $6,922.72. SEE MONEY

The unknown cycling champion of CSUF

It is no secret that, as a well-documented commuter campus with nearly 40,000 students and just over 1,400 faculty members, Cal State Fullerton has long been cultivating an environment where students meander through overcrowded walkways and spend a majority of their collegiate careers quietly tucked away as nameless faces in the backs of classrooms, slowly slipping through the cracks. With the grim outlook surrounding the highly-populated and arguably under-engaged student body at CSUF, one of the ways which Fullerton has attempted to remedy the issue of a largely unconnected student body is by propagandizing the idea of Titan pride through highlighting their best and brightest on campus. However, for Imeh Nsek, the CSUF cycling club member and treasurer, a void in Titan pride and a feeling of invisibility as an influential cyclist at CSUF have persisted for him, despite being crowned a national champion on the cycling stage after placing first in the Collegiate Criterium National Championships in 2018. For CSUF and a number of other college campuses, the foremost of these pride-instilling practices involves the emphasis of school sports, their most successful programs and their most highly touted individual athletes. When asked if anyone on campus had congratulated Nsek on his accomplishments on the national collegiate stage, he said no one had approached him. “I see the kids from the cycling club around, sometimes

Imeh Nsek, a senior economics major, won the men’s criterium national championship with a time of 1:20.46.

and they’d be like, ‘Oh, this is the guy,’ and whoever I was walking with, they’d have to be like, ‘Bro, you know who this guy is,’ but it was only like three people,” Nsek said. Yet, for the champion, the lack of affection from a

distant student body came as no surprise. “It’s something that I knew and kind of expected by not playing a mainstream sport like basketball, baseball or football,” Nsek said. The 20-year-old economics

major also gave credence to the fact that belonging to a commuter campus likely contributed to his sprint-to-win national victory falling on deaf Titan ears. Deprived of the campus recognition deserving of an athlete

representing their university on a national stage, Nsek’s major summer finish did not go unnoticed by the local cycling community who Nsek and his brother, Ama, have been involved with for a number of years. SEE BIKE 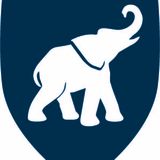