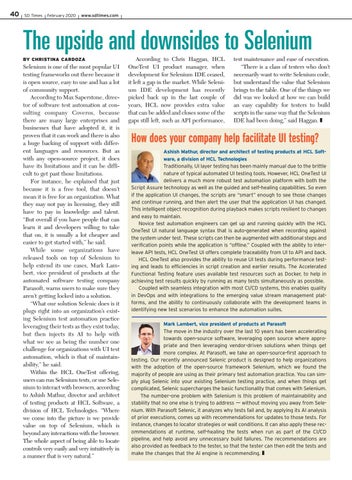 The upside and downsides to Selenium BY CHRISTINA CARDOZA

Selenium is one of the most popular UI testing frameworks out there because it is open source, easy to use and has a lot of community support. According to Max Saperstone, director of software test automation at consulting company Coveros, because there are many large enterprises and businesses that have adopted it, it is proven that it can work and there is also a huge backing of support with different languages and resources. But as with any open-source project, it does have its limitations and it can be difficult to get past those limitations. For instance, he explained that just because it is a free tool, that doesn’t mean it is free for an organization. What they may not pay in licensing, they still have to pay in knowledge and talent. “But overall if you have people that can learn it and developers willing to take that on, it is usually a lot cheaper and easier to get started with,” he said. While some organizations have released tools on top of Selenium to help extend its use cases, Mark Lambert, vice president of products at the automated software testing company Parasoft, warns users to make sure they aren’t getting locked into a solution. “What our solution Selenic does is it plugs right into an organization’s existing Selenium test automation practice leveraging their tests as they exist today, but then injects its AI to help with what we see as being the number one challenge for organizations with UI test automation, which is that of maintainability,” he said. Within the HCL OneTest offering, users can run Selenium tests, or use Selenium to interact with browsers, according to Ashish Mathur, director and architect of testing products at HCL Software, a division of HCL Technologies. “Where we come into the picture is we provide value on top of Selenium, which is beyond any interactions with the browser. The whole aspect of being able to locate controls very easily and very intuitively in a manner that is very natural.”

According to Chris Haggan, HCL OneTest UI product manager, when development for Selenium IDE ceased, it left a gap in the market. While Selenium IDE development has recently picked back up in the last couple of years, HCL now provides extra value that can be added and closes some of the gaps still left, such as API performance,

test maintenance and ease of execution. “There is a class of testers who don’t necessarily want to write Selenium code, but understand the value that Selenium brings to the table. One of the things we did was we looked at how we can build an easy capability for testers to build scripts in the same way that the Selenium IDE had been doing,” said Haggan. z

How does your company help facilitate UI testing? Ashish Mathur, director and architect of testing products at HCL Software, a division of HCL Technologies Traditionally, UI layer testing has been mainly manual due to the brittle nature of typical automated UI testing tools. However, HCL OneTest UI delivers a much more robust test automation platform with both the Script Assure technology as well as the guided and self-healing capabilities. So even if the application UI changes, the scripts are “smart” enough to see those changes and continue running, and then alert the user that the application UI has changed. This intelligent object recognition during playback makes scripts resilient to changes and easy to maintain. Novice test automation engineers can get up and running quickly with the HCL OneTest UI natural language syntax that is auto-generated when recording against the system under test. These scripts can then be augmented with additional steps and verification points while the application is “offline.” Coupled with the ability to interleave API tests, HCL OneTest UI offers complete traceability from UI to API and back. HCL OneTest also provides the ability to reuse UI tests during performance testing and leads to efficiencies in script creation and earlier results. The Accelerated Functional Testing feature uses available test resources such as Docker, to help in achieving test results quickly by running as many tests simultaneously as possible. Coupled with seamless integration with most CI/CD systems, this enables quality in DevOps and with integrations to the emerging value stream management platforms, and the ability to continuously collaborate with the development teams in identifying new test scenarios to enhance the automation suites. Mark Lambert, vice president of products at Parasoft The move in the industry over the last 10 years has been accelerating towards open-source software, leveraging open source where appropriate and then leveraging vendor-driven solutions when things get more complex. At Parasoft, we take an open-source-first approach to testing. Our recently announced Selenic product is designed to help organizations with the adoption of the open-source framework Selenium, which we found the majority of people are using as their primary test automation practice. You can simply plug Selenic into your existing Selenium testing practice, and when things get complicated, Selenic supercharges the basic functionality that comes with Selenium. The number-one problem with Selenium is this problem of maintainability and stability that no one else is trying to address — without moving you away from Selenium. With Parasoft Selenic, it analyzes why tests fail and, by applying its AI analysis of prior executions, comes up with recommendations for updates to those tests. For instance, changes to locator strategies or wait conditions. It can also apply these recommendations at runtime, self-healing the tests when run as part of the CI/CD pipeline, and help avoid any unnecessary build failures. The recommendations are also provided as feedback to the tester, so that the tester can then edit the tests and make the changes that the AI engine is recommending. z 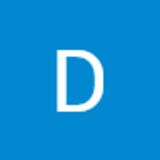 The latest issue of SD Times is now available. The February issue marks SD Times 20th anniversary and features how software development has...

The latest issue of SD Times is now available. The February issue marks SD Times 20th anniversary and features how software development has...