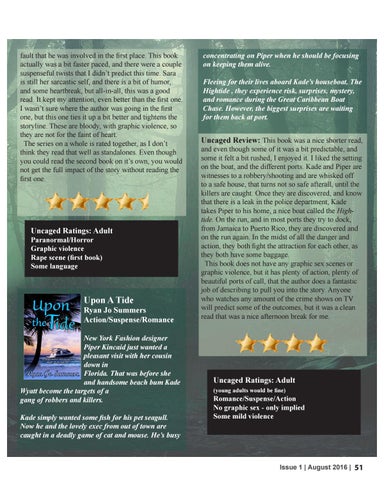 fault that he was involved in the first place. This book actually was a bit faster paced, and there were a couple suspenseful twists that I didn’t predict this time. Sara is still her sarcastic self, and there is a bit of humor, and some heartbreak, but all-in-all, this was a good read. It kept my attention, even better than the first one. I wasn’t sure where the author was going in the first one, but this one ties it up a bit better and tightens the storyline. These are bloody, with graphic violence, so they are not for the faint of heart. The series on a whole is rated together, as I don’t think they read that well as standalones. Even though you could read the second book on it’s own, you would not get the full impact of the story without reading the first one.

Ryan Jo Summers Action/Suspense/Romance New York Fashion designer Piper Kincaid just wanted a pleasant visit with her cousin down in Florida. That was before she and handsome beach bum Kade Wyatt become the targets of a gang of robbers and killers. Kade simply wanted some fish for his pet seagull. Now he and the lovely exec from out of town are caught in a deadly game of cat and mouse. He’s busy

concentrating on Piper when he should be focusing on keeping them alive. Fleeing for their lives aboard Kade’s houseboat, The Hightide , they experience risk, surprises, mystery, and romance during the Great Caribbean Boat Chase. However, the biggest surprises are waiting for them back at port.

Uncaged Review: This book was a nice shorter read, and even though some of it was a bit predictable, and some it felt a bit rushed, I enjoyed it. I liked the setting on the boat, and the different ports. Kade and Piper are witnesses to a robbery/shooting and are whisked off to a safe house, that turns not so safe afterall, until the killers are caught. Once they are discovered, and know that there is a leak in the police department, Kade takes Piper to his home, a nice boat called the Hightide. On the run, and in most ports they try to dock, from Jamaica to Puerto Rico, they are discovered and on the run again. In the midst of all the danger and action, they both fight the attraction for each other, as they both have some baggage. This book does not have any graphic sex scenes or graphic violence, but it has plenty of action, plenty of beautiful ports of call, that the author does a fantastic job of describing to pull you into the story. Anyone who watches any amount of the crime shows on TV will predict some of the outcomes, but it was a clean read that was a nice afternoon break for me.

Romance/Suspense/Action No graphic sex - only implied Some mild violence