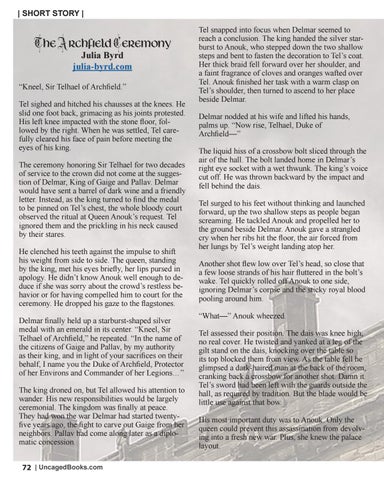 “Kneel, Sir Telhael of Archfield.” Tel sighed and hitched his chausses at the knees. He slid one foot back, grimacing as his joints protested. His left knee impacted with the stone floor, followed by the right. When he was settled, Tel carefully cleared his face of pain before meeting the eyes of his king. The ceremony honoring Sir Telhael for two decades of service to the crown did not come at the suggestion of Delmar, King of Gaige and Pallav. Delmar would have sent a barrel of dark wine and a friendly letter. Instead, as the king turned to find the medal to be pinned on Tel’s chest, the whole bloody court observed the ritual at Queen Anouk’s request. Tel ignored them and the prickling in his neck caused by their stares. He clenched his teeth against the impulse to shift his weight from side to side. The queen, standing by the king, met his eyes briefly, her lips pursed in apology. He didn’t know Anouk well enough to deduce if she was sorry about the crowd’s restless behavior or for having compelled him to court for the ceremony. He dropped his gaze to the flagstones. Delmar finally held up a starburst-shaped silver medal with an emerald in its center. “Kneel, Sir Telhael of Archfield,” he repeated. “In the name of the citizens of Gaige and Pallav, by my authority as their king, and in light of your sacrifices on their behalf, I name you the Duke of Archfield, Protector of her Environs and Commander of her Legions…” The king droned on, but Tel allowed his attention to wander. His new responsibilities would be largely ceremonial. The kingdom was finally at peace. They had won the war Delmar had started twentyfive years ago, the fight to carve out Gaige from her neighbors. Pallav had come along later as a diplomatic concession. 72 | UncagedBooks.com

Tel snapped into focus when Delmar seemed to reach a conclusion. The king handed the silver starburst to Anouk, who stepped down the two shallow steps and bent to fasten the decoration to Tel’s coat. Her thick braid fell forward over her shoulder, and a faint fragrance of cloves and oranges wafted over Tel. Anouk finished her task with a warm clasp on Tel’s shoulder, then turned to ascend to her place beside Delmar. Delmar nodded at his wife and lifted his hands, palms up. “Now rise, Telhael, Duke of Archfield—” The liquid hiss of a crossbow bolt sliced through the air of the hall. The bolt landed home in Delmar’s right eye socket with a wet thwunk. The king’s voice cut off. He was thrown backward by the impact and fell behind the dais. Tel surged to his feet without thinking and launched forward, up the two shallow steps as people began screaming. He tackled Anouk and propelled her to the ground beside Delmar. Anouk gave a strangled cry when her ribs hit the floor, the air forced from her lungs by Tel’s weight landing atop her. Another shot flew low over Tel’s head, so close that a few loose strands of his hair fluttered in the bolt’s wake. Tel quickly rolled off Anouk to one side, ignoring Delmar’s corpse and the sticky royal blood pooling around him. “What—” Anouk wheezed. Tel assessed their position. The dais was knee high, no real cover. He twisted and yanked at a leg of the gilt stand on the dais, knocking over the table so its top blocked them from view. As the table fell he glimpsed a dark-haired man at the back of the room, cranking back a crossbow for another shot. Damn it. Tel’s sword had been left with the guards outside the hall, as required by tradition. But the blade would be little use against that bow. His most important duty was to Anouk. Only the queen could prevent this assassination from devolving into a fresh new war. Plus, she knew the palace layout.