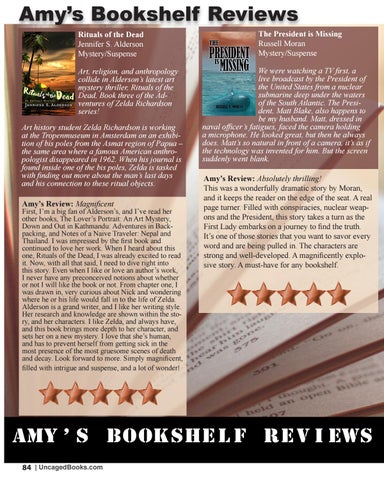 Amy’s Bookshelf Reviews Rituals of the Dead Jennifer S. Alderson Mystery/Suspense Art, religion, and anthropology collide in Alderson’s latest art mystery thriller, Rituals of the Dead, Book three of the Adventures of Zelda Richardson series! Art history student Zelda Richardson is working at the Tropenmuseum in Amsterdam on an exhibition of bis poles from the Asmat region of Papua – the same area where a famous American anthropologist disappeared in 1962. When his journal is found inside one of the bis poles, Zelda is tasked with finding out more about the man’s last days and his connection to these ritual objects. Amy’s Review: Magnificent

First, I’m a big fan of Alderson’s, and I’ve read her other books, The Lover’s Portrait: An Art Mystery, Down and Out in Kathmandu: Adventures in Backpacking, and Notes of a Naive Traveler: Nepal and Thailand. I was impressed by the first book and continued to love her work. When I heard about this one, Rituals of the Dead, I was already excited to read it. Now, with all that said, I need to dive right into this story. Even when I like or love an author’s work, I never have any preconceived notions about whether or not I will like the book or not. From chapter one, I was drawn in, very curious about Nick and wondering where he or his life would fall in to the life of Zelda. Alderson is a grand writer, and I like her writing style. Her research and knowledge are shown within the story, and her characters. I like Zelda, and always have, and this book brings more depth to her character, and sets her on a new mystery. I love that she’s human, and has to prevent herself from getting sick in the most presence of the most gruesome scenes of death and decay. Look forward to more. Simply magnificent, filled with intrigue and suspense, and a lot of wonder!

The President is Missing Russell Moran Mystery/Suspense We were watching a TV first, a live broadcast by the President of the United States from a nuclear submarine deep under the waters of the South Atlantic. The President, Matt Blake, also happens to be my husband. Matt, dressed in naval officer’s fatigues, faced the camera holding a microphone. He looked great, but then he always does. Matt’s so natural in front of a camera, it’s as if the technology was invented for him. But the screen suddenly went blank. Amy’s Review: Absolutely thrilling! This was a wonderfully dramatic story by Moran, and it keeps the reader on the edge of the seat. A real page turner. Filled with conspiracies, nuclear weapons and the President, this story takes a turn as the First Lady embarks on a journey to find the truth. It’s one of those stories that you want to savor every word and are being pulled in. The characters are strong and well-developed. A magnificently explosive story. A must-have for any bookshelf.