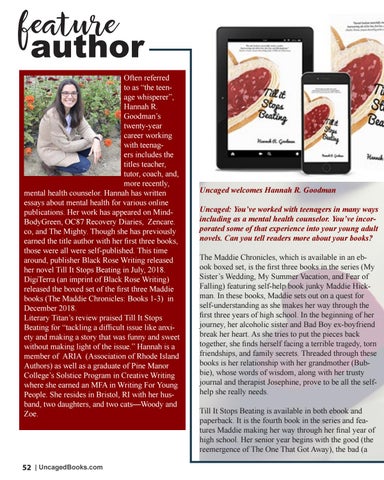 feature author Often referred to as “the teenage whisperer”, Hannah R. Goodman’s twenty-year career working with teenagers includes the titles teacher, tutor, coach, and, more recently, mental health counselor. Hannah has written essays about mental health for various online publications. Her work has appeared on MindBodyGreen, OC87 Recovery Diaries, Zencare. co, and The Mighty. Though she has previously earned the title author with her first three books, those were all were self-published. This time around, publisher Black Rose Writing released her novel Till It Stops Beating in July, 2018. DigiTerra (an imprint of Black Rose Writing) released the boxed set of the first three Maddie books (The Maddie Chronicles: Books 1-3) in December 2018. Literary Titan’s review praised Till It Stops Beating for “tackling a difficult issue like anxiety and making a story that was funny and sweet without making light of the issue.” Hannah is a member of ARIA (Association of Rhode Island Authors) as well as a graduate of Pine Manor College’s Solstice Program in Creative Writing where she earned an MFA in Writing For Young People. She resides in Bristol, RI with her husband, two daughters, and two cats—Woody and Zoe.

Uncaged welcomes Hannah R. Goodman Uncaged: You’ve worked with teenagers in many ways including as a mental health counselor. You’ve incorporated some of that experience into your young adult novels. Can you tell readers more about your books? The Maddie Chronicles, which is available in an ebook boxed set, is the first three books in the series (My Sister’s Wedding, My Summer Vacation, and Fear of Falling) featuring self-help book junky Maddie Hickman. In these books, Maddie sets out on a quest for self-understanding as she makes her way through the first three years of high school. In the beginning of her journey, her alcoholic sister and Bad Boy ex-boyfriend break her heart. As she tries to put the pieces back together, she finds herself facing a terrible tragedy, torn friendships, and family secrets. Threaded through these books is her relationship with her grandmother (Bubbie), whose words of wisdom, along with her trusty journal and therapist Josephine, prove to be all the selfhelp she really needs. Till It Stops Beating is available in both ebook and paperback. It is the fourth book in the series and features Maddie making her way through her final year of high school. Her senior year begins with the good (the reemergence of The One That Got Away), the bad (a