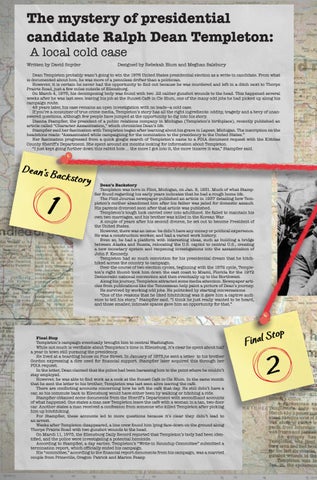 Dean Templeton probably wasn’t going to win the 1976 United States presidential election as a write-in candidate. From what is documented about him, he was more of a penniless drifter than a politician. However, it is certain he never had the opportunity to find out because he was murdered and left in a ditch next to Thorpe Prairie Road, just a few miles outside of Ellensburg. On March 4, 1975, his decomposing body was found with two .22 caliber gunshot wounds to the head. This happened several weeks after he was last seen leaving his job at the Sunset Café in Cle Elum, one of the many odd jobs he had picked up along his campaign route. 46 years later, his case remains an open investigation with no leads—a cold case. If you’re a consumer of true crime media, Templeton’s story has all the right ingredients: oddity, tragedy and a bevy of unanswered questions, although few people have jumped at the opportunity to dig into his story. Dianna Stampfler, the president of a public relations company in Michigan (Templeton’s birthplace), recently published an article called “Character Assassination,” which chronicles Dean’s life. Stampfler said her fascination with Templeton began after learning about his grave in Lapeer, Michigan. The inscription on the headstone reads: “Assassinated while campaigning for the nomination to the presidency to the United States.” Her fascination progressed from a quick google search of Templeton’s name to a FOIA document request with the Kittitas County Sheriff’s Department. She spent around six months looking for information about Templeton. “I just kept going further down this rabbit hole … the more I got into it, the more bizarre it was,” Stampfler said.

Dean’s Backstory Templeton was born in Flint, Michigan, on Jan. 9, 1931. Much of what Stampfler found regarding his early years indicates that he had a rough home life. The Flint Journal newspaper published an article in 1937 detailing how Templeton’s mother abandoned him after his father was jailed for domestic assault. His parents divorced soon after that article was published. Templeton’s tough luck carried over into adulthood. He failed to maintain his own two marriages, and his brother was killed in the Korean War. A couple of years after his second divorce, he set out to become President of the United States. However, there was an issue: he didn’t have any money or political experience. He was a construction worker, and had a varied work history. Even so, he had a platform with interesting ideas, such as building a bridge between Alaska and Russia, relocating the U.S. capitol to central U.S., creating a new monetary system and reopening investigations into the assassination of John F. Kennedy. Templeton had so much conviction for his presidential dream that he hitchhiked across the country to campaign. Over the course of two election cycles, beginning with the 1972 cycle, Templeton’s right thumb took him down the east coast to Miami, Florida for the 1972 Democratic national convention and then eventually up to the Northwest. Along his journey, Templeton attracted some media attention. Newspaper articles from publications like the Tennessean help paint a picture of Dean’s journey. He survived by working odd jobs. He politicked by starting conversations. “One of the reasons that he liked hitchhiking was it gave him a captive audience to tell his story,” Stampfler said. “I think he just really wanted to be heard, and those smaller, intimate spaces gave him an opportunity for that.”

Final Stop Templeton’s campaign eventually brought him to central Washington. While not much is verifiable about Templeton’s time in Ellensburg, it’s clear he spent about half a year in town still pursuing the presidency. He lived at a boarding house on Pine Street. In January of 1975,he sent a letter to his brother Gordon expressing a dire need for financial support. Stampfler later acquired this through her FOIA request. In the letter, Dean claimed that the police had been harassing him to the point where he couldn’t stay employed. However, he was able to find work as a cook at the Sunset Café in Cle Elum. In the same month that he sent the letter to his brother, Templeton was last seen alive leaving the café. There are conflicting accounts concerning how he left the café that day. He still didn’t have a car, so his commute back to Ellensburg would have either been by walking or hitching a ride. Stampfler obtained some documents from the Sheriff’s Department with secondhand accounts of what happened. One states a man saw Templeton leave the café with a woman in a tan, two-door car. Another states a man received a confession from someone who killed Templeton after picking him up hitchhiking. For Stampfler, these accounts led to more questions because it’s clear they didn’t lead to an arrest. Weeks after Templeton disappeared, a line crew found him lying face-down on the ground along Thorpe Prairie Road with two gunshot wounds to the head. On March 11, 1975, the Ellensburg Daily Record reported that Templeton’s body had been identified, and the police were investigating a potential homicide. According to Stampfler, a day earlier, Templeton’s “Write-in Roundup Committee” submitted a termination report, which officially ended his campaign. His “committee,” according to the financial report documents from his campaign, was a married couple from Prineville, Oregon: Patrick and Marion Feany. 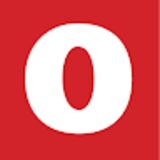